Do you believe in God or god? 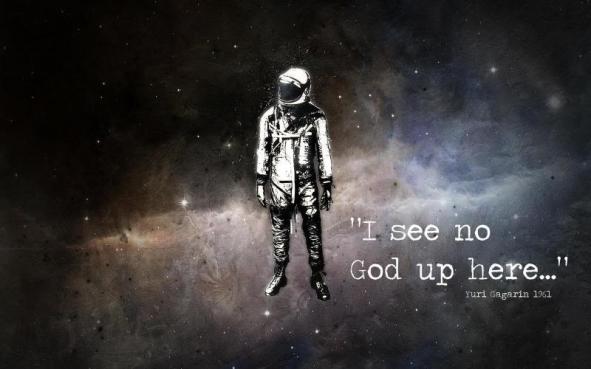 After Yuri Gagarin’s famous flight into outer space, Nikita Khrushchev addressed a plenary session of the Central Committee and vigorously commended Communism’s campaign against all religion: “Why are you clinging to God?” he asked. “Here Gagarin flew into space and didn’t see God.”

The quote brings a smile to our faces. How utterly silly, we think. Of course Gagarin did not see God, and as a faithful Orthodox Christian he was not expecting to see God. God is not to be found out among the stars or in any place. He is, after all, invisible, incorporeal, immaterial, spiritual. He is the maker of space and time. He is a supernatural being. He can be neither apprehended by our senses nor measured by our scientific instruments.

A good atheistic philosopher, however, would immediately pounce on our response. “All you have done is posit a being whose existence can be neither proven nor falsified. When I was an atheist back in my college days, I loved to cite Antony Flew’s famous parable of the invisible gardener. It goes something like this

Two people return to their long neglected garden and find, among the weeds, that a few of the old plants are surprisingly vigorous. One says to the other, ‘It must be that a gardener has been coming and doing something about these weeds.’ The other disagrees and an argument ensues. They pitch their tents and set a watch. No gardener is ever seen. The believer wonders if there is an invisible gardener, so they patrol with bloodhounds but the bloodhounds never give a cry. Yet the believer remains unconvinced, and insists that the gardener is invisible, has no scent and gives no sound. The skeptic doesn’t agree, and asks how a so-called invisible, intangible, elusive gardener differs from an imaginary gardener, or even no gardener at all.

But notice the lower-case “god.” Here is our opening, if we are shrewd enough to walk through it. Thankfully, David B. Hart has seen the critical weakness in popular atheistic propaganda:

Beliefs regarding fairies concern a certain kind of object that may or may not exist within the world, and such beliefs have much the same sort of intentional and rational shape as beliefs regarding the neighbors over the hill or whether there are such things as black swans. Beliefs regarding God concern the source and end of all reality, the unity and existence of every particular thing and of the totality of all things, the ground of the possibility of anything at all. Fairies and gods, if they exist, occupy something of the same conceptual space as organic cells, photons, and the force of gravity, and so the sciences might perhaps have something to say about them, if a proper medium for investigating them could be found.

God, by contrast, is the infinite actuality that makes it possible for photons and (possibly) fairies to exist, and so can be “investigated” only, on the one hand, by acts of logical deduction and conjecture or, on the other, by contemplative or spiritual experiences. Belief or disbelief in fairies or gods could never be validated by philosophical arguments made from first principles; the existence or nonexistence of Zeus is not a matter that can be intelligibly discussed in the categories of modal logic or metaphysics, any more than the existence of tree frogs could be; if he is there at all, one must go on an expedition to find him.

The question of God, by contrast, is one that must be pursued in terms of the absolute and the contingent, the necessary and the fortuitous, act and potency, possibility and impossibility, being and nonbeing, transcendence and immanence. Evidence for or against the existence of Thor or King Oberon would consist only in local facts, not universal truths of reason; it would be entirely empirical, episodic, psychological, personal, and hence elusive. Evidence for or against the reality of God, if it is there, pervades every moment of the experience of existence, every employment of reason, every act of consciousness, every encounter with the world around us. (“God, Gods, and Fairies,” First Things; expanded in Hart’s recently published book The Experience of God)

God is not a god. But how do we stop thinking of him as one?

6 Responses to Do you believe in God or god?