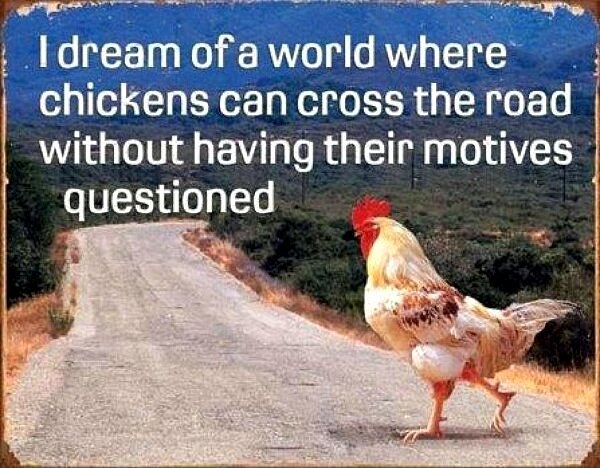 Greg Boyd: It’s a possibility that the chicken crossed the road.

Mark Driscoll: Because of the rooster’s leadership.

Pelagius: Because the chicken was able to.

John Piper: God decreed the event to maximize his glory.

Irenaeus: The glory of God is the chicken fully alive.

C.S. Lewis: If a chicken finds itself with a desire that nothing on this side can satisfy, the most probable explanation is that it was created for the other side.

Billy Graham: The chicken was surrendering all.

Pluralist: The chicken took one of many equally valid roads.

Universalist: All chickens cross the road.

Annihilationist: The chicken was hit by a car and ceased to exist.

Tim LaHaye: The chicken didn’t want to be left behind.

Thomas: I won’t believe the chicken crossed unless I see it with my own eyes.

Philip: The chicken teleported to the other side.

Rob Bell: The chicken. Crossed the road. To get. Cool glasses.

This entry was posted in Humor. Bookmark the permalink.