Searching for Our Human Face: The Christic Body

It is interesting to note that precisely at that historical moment when the advent of nominalist individuals and the voluntarist version of freedom is presaging the rise of hostility towards nature, the crypto-fascism of the (Hobbesian) modern state—needed to police a threatening anarchy—and loss of sacral authority as kingship was redefined in terms of an arbitrary divine will, one also gets an ecclesial sensibility that is equally concerned to strongly define who is inside and who is outside, lacks a proper cosmic dimension to its soteriology, and feels compelled by the momentum of a particular theology to remand salvation to an inscrutable will far outside the agape of the Triune God proclaimed by the Gospel.

Just at this time, a contrary voice to the prevailing ethos was quietly sheltered by the sheltering God. The power of a voice to speak to a people rises and falls. Poets and artists have their fashionable periods and long or short desuetude. Yet I cannot think but that there was providence at work in the visionary speech of Julian of Norwich. Eliot, of course, famously wove her voice into his masterpiece, The Four Quartets. We, who are the heirs of the modern thing, often find her consoling. She is more popular now than in the time of her earthly sojourn. The spiritual counsel she offered—and what she opposed—has gained clarity with time.

F. C. Bauerschmidt’s Julian of Norwich and the Mystical Body Politic of Christ is rather a mouthful of a title and academic, but worthy for its insight for all that. Bauerschmidt draws attention to different ruling images and epistemological modes that offer rival paradigms for how we should think about reality. The political counterpart to the buffered self is a body politic that is a “smooth body,” where eccentricity and discomfiting difference have been nullified by the kind of coincident interiorizing of ideological values and exercise of disciplining power that Foucault was keen to point out. Ecclesial efforts at uniform moral rectitude and regulative standards often strike post-Reformation sensibilities as a laudable determination to eliminate clerical decadence, whilst making the striving for holiness more egalitarian. The practical effect, played out through ensuing centuries, has been a forgetting that Christianity is a revelation of ontological change. The motivation is certainly understandable, but there is something ersatz in the result.

Counter to an abstract body politic where power and instrumental reason work to achieve an unblemished and uniform unity (this means, among other things, the coercive removal of dissent), Bauerschmidt proposes that Julian’s reflection upon the crucified body of Christ demonstrates a kind of fleshly, participatory knowing that resists closure into a homogenous zone of safe respectability. “The wound that human sin inflicts upon Jesus’ body is healed, not through closure, so as to restore his body to smoothness, but by transformation into the open site of God’s salvific work . . . The side of Christ torn open by human sin, not the rightly policed body of heroic virtue, is the appearing of the Godhead’s infinite love” (p. 105). If you think not with a “clear and distinct idea” derived from a scrupulous withdrawal from the world, but along with the image of the body of Christ, a larger, wilder possibility begins to emerge. Her descriptions of Christ’s body present us with a God who stakes the salvation of the cosmos on something as abject and humiliated as a crucified body. . . . The body of Christ, like Bakhtin’s grotesque body, is an “unfinished and open body (dying, bringing forth and being born): that is “not separated from the world by clearly defined boundaries; it is blended with the world, with animals, with objects.” (p. 107).

There’s much that could be made out of this. One could advert to how in the thought of Maximus the Confessor, ontology and cosmology are an extension of his Christology, this, as preamble to discussing some fateful aspects of Duns Scotus’ Christology for ontology, especially insofar as it impinges on the concept of the person. Yet I will save all that for another day. I can be kind when I want to. Anyway, I have a puzzle to propose; a symbolic riddle as foray into a theology of the body. In one of his erudite excursus that contain half the fascination of The Pillar and Ground of the Truth, Pavel Florensky sketches out what he calls a homotypy or mirroring in the human body where organs of the lower and upper body recapitulate each other.

Aside from the oddness that one can plausibly discover such a mirroring, I note the equation of the tongue with the clitoris and glans. I further remark a nexus of related potencies: logos, relation, pleasure, intimacy, but also, the capacity to lie. Perhaps you do not quite get my point. Charles Williams has some interesting thoughts on the symbolism of the body, as does the Sufi perennialist, Rodney Blackhirst, in his excellent Primordial Alchemy and Modern Religion. You may look there for further elucidation. 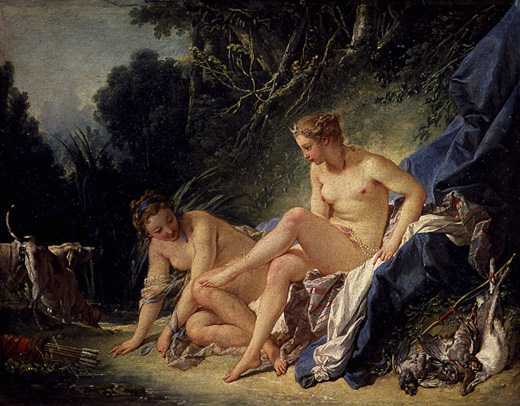 Though now it occurs to me that the world of art may help evince something of what I am after. In the estimable and pithy Beauty: a Very Short Introduction, Roger Scruton adverts to Francois Boucher, the court painter to Louis XV. In particular, he talks about his erotica, paintings that are pretty, though skirting the edge of kitsch. He describes them thus:

Boucher’s nudes are not individualized by their faces. As a matter of fact, they all have the same face, which is not a face at all, but an assemblage of facial parts. The lips just slightly apart as though in anticipation of a kiss; the clear eyes under lowered lashes; the oval contours filled with flushing cheeks that swell like sails in a summer breeze—all such features, brilliantly displayed from every angle and in every light, carry a single meaning, which is that of sexual appetite. The eyes look at things—but only inconsequential things in the picture. No soul shoots out from them, no gaze questions or troubles or enraptures: all is fixed in stillness—the stillness of creatures too abstract to take ownership of life. (p. 125)

Now I take it that this depersonalized sensual miasma, like the rococo gaudiness of the bordello, is a form of anesthetic, a sentimental art that softens the poison of fallen bodies and disappointing sexuality. In general, as is well known, the early church fathers were unable to get past a deep-seated pessimism about sexual love. It was, at best, an Aristotelian generation that could only perpetuate death. There is certainly enough pain, sorrow, and abuse to justify much of their misgiving. Still, I think they are ultimately too suffused with an antique sadness that has not yet been properly astonished by the redemption of the body worked by Christ. Compare Boucher’s soulless fantasies with the words of Macarius of Egypt: “For the soul that has been deemed worthy to participate in the spirit of his (God’s) light and has been made radiant by the beauty of his ineffable glory, since he has prepared it for himself as a throne and dwelling place, becomes all light, all face, all eye” (quoted in Yannaras, Person and Eros, p. 293).

(Go to “The Liminality of Body”)

This entry was posted in Brian Moore. Bookmark the permalink.

2 Responses to Searching for Our Human Face: The Christic Body