Parousia and the Glorification of the Cosmos

“But according to his promise we wait for new heavens and a new earth in which righteousness dwells” (2 Pet 3:13). 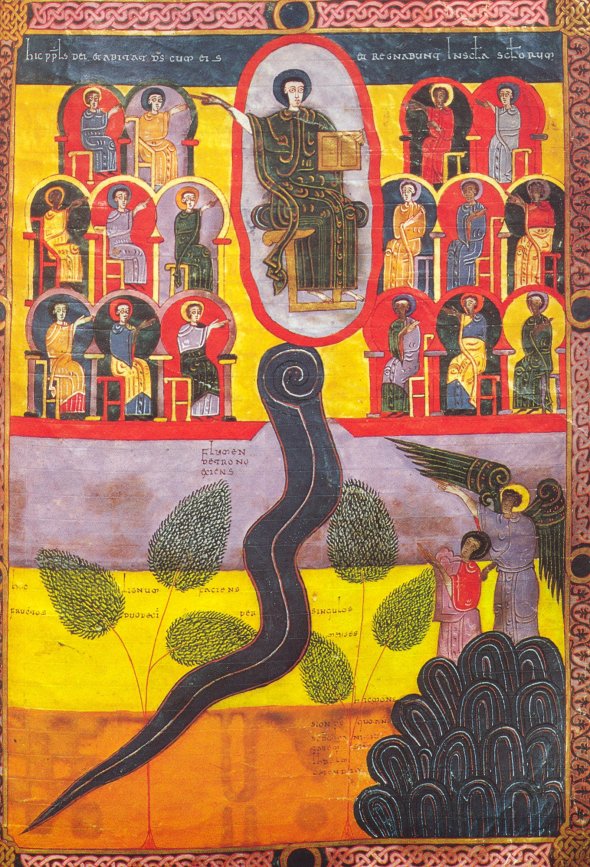 When Christ returns in glory, all will be made new. The cosmos will be transfigured, transformed, transmuted, redeemed, renewed, sanctified, sophianized, glorified, deified. These are just words, of course. We have to use them in order to talk about the coming Kingdom of God, but the eschatological event of which they speak transcends our imagining. The consummation of cosmic history will be glorious. This is the hope that empowers and fills all gospel preaching.

As we have seen in this series, the primary characteristic of the parousia is glory. The risen Christ will appear in the glory of the Spirit who eternally rests upon him. The time of hiddenness is over. Glory comes into the world and all is glorified. “The glory that accompanies the parousia,” writes Sergius Bulgakov, “not only belongs to Christ but is also communicated through Him to the world in which the Holy Spirit abides kenotically” (The Bride of the Lamb, p. 398). For Bulgakov the gift of glory is the gift of salvation. The universal glorification thus represents the consummation of the salvific work already accomplished by Incarnation and Pentecost.

That the eschatological manifestation of the divine Son does not destroy the cosmos but redeems it depends, asserts Bulgakov, on the appropriation of human nature by the divine Word: “The flesh of the world became the flesh of Christ in His humanity. Therefore, the world became capable of bearing the Pentecost, of receiving the fire of the Holy Spirit without being consumed by it” (p. 419). In its fallen state the appearance of the naked God could only mean the world’s utter destruction; but through hypostatic union the Word has joined the world to himself, thus making it possible for it to receive the Holy Spirit at Pentecost without bursting “into flame from the fiery tongues of the Holy Spirit” (p. 422). The soteriological logic appears to go something like this: union with human nature by incarnation, glorification of human nature by resurrection and ascension, sanctification of creation by Pentecostal bestowal of the Spirit, and deification of creation by parousia. The eternal Son “receives glory for the whole world,” Bulgakov comments, thereby protecting “the world from the consuming fire, which becomes a ‘joyous light, a meek shining of Holy Glory,’ according to the vespers hymn” (p. 424). The Incarnation is thus the ontological ground of the indwelling of the Holy Spirit and the apocalyptic deification of creation:

In order to save the world and man, “the Word was made flesh” (John 1:14). Christ “went to look for the sheep that had strayed, and carrying it on his shoulders, he brought it back to the Father,” as the liturgical hymn says. He laid the foundation of a new humanity and a new world. In order that this principle could grow, the Holy Spirit was sent into the world by Christ from the Father. The world had always contained the power of the Holy Spirit by virtue of its (albeit creaturely) sophiancity, but, by itself, it would certainly have been incapable of receiving and encompassing the descent of the Holy Spirit. However, the path for the Spirit was opened by the Incarnation. The Holy Spirit comes into the world this time as the “other” Comforter, bringing with Him Christ the Comforter. “He dwelleth with you, and shall be in you. I will not leave you comfortless: I will come to you” (John 14:17-18). The Holy Spirit accomplishes the sanctification of the world, the work of Christ, upon whom He reposes. In this sense, by its fruits, the Pentecost is the continuing Incarnation.

Meanwhile, the Holy Spirit accomplishes the descent of the Son from heaven, surrounding Him with glory, which is the same both in heaven and on earth and which existed before the foundation of the world and is now proper to Him. The world is now ready to receive this glory, for it has already received and has Christ and the Holy Spirit who reposes upon Him. Prior to the parousia, the Holy Spirit acts in the world only by virtue of the spiritual presence of Christ in it. After the parousia, with the new coming of Christ into the world, there are no longer any limits for this action, because Christ, present in the world, receives for the latter the fullness of the Holy Spirit. (pp. 404-405)

Cur Deus homo? Bulgakov is not engaging in arm-chair speculation. He is living within the biblical narrative and trying to understand its inner connections. Why was the world not incinerated by the Pentecostal glory? How can it survive the revelation of Christ in resplendent majesty? Uzzah, after all, died merely by accidentally touching the Ark of the Covenant. If the world is to be brought (safely) into deifying union with divinity, it must be vivified from within, suggests the Russian theologian: “The parousia must first occur inside the world itself” (p. 418). By the gift of the Spirit God prepares the cosmos to receive the glory of God.

A comparison between the theophany experienced by Moses on Mount Sinai and the doxophany experienced by the Apostles on the Mount of Transfiguration may prove illuminating. Moses asks God to reveal to him his glory. The Lord replies that he will show him his goodness and proclaim his ineffable Name; but he cannot allow Moses to see his face, “for man shall not see me and live” (Ex 32:20). The Lord then hides Moses in a cleft of the rock (which the Fathers typologically identified as Christ) and allows Moses to see his backside. But on the Mount of Transfiguration the incarnate Son permits Moses, with Elijah and the three Apostles, to see his face. “It is remarkable,” Bulgakov comments, “that, on Tabor, the same Moses sees not only the glory but also the face of God manifested now in the flesh. The glory illuminates Christ in the form of a cloud, which moderates and kenotically veils, as it were, the fullness of the manifestation of the glory. But it is only in the New Testament that the personal appearance of the glory becomes possible” (p. 423, n. 31). Yet even still the glory manifested in the Transfiguration is not the fullness of glory that will be displayed in the parousia. The uncreated Taboric light anticipates the glory of the incarnate Son’s return: “The parousia has a similar significance: It is the appearance of Christ in glory, that is, of the Holy Spirit reposing upon Him, and also of the Glory itself, that is, of the Holy Spirit, as the transfiguring and everlasting light” (p. 406). The way Bulgakov connects the divine glory with the person of the Holy Spirit strikes me as biblically right. Someone needs to compare Bulgakov’s interpretation of the Transfiguration with that of St Gregory Palamas.

In a catastrophic transcensus the parousia of Christ will effect the transfiguration of the world through the Holy Spirit, who now kenotically indwells the world. Christ enters the world in glory, and the world enters into the glory of Christ:

In Scripture, the parousia is accompanied by the fire of the world, the destruction of the world, followed by its transfiguration, but this does not signify a succession or coincidence in time of two parallel events. It is one and the same event: the coming of Christ in glory and the revelation of glory to the world correspond to the action of the Holy Spirit. This fire—in which the present heavens and earth will be consumed on the day of judgment (see 2 Pet. 3:7), when “the heavens shall pass away with a great noise and the elements shall melt with fervent heat” (v. 10)—signifies the passage of the world through the Pentecost. The Pentecost’s fiery tongues become the flame of the world fire, not consuming but transmuting the world. This figure represents a hieroglyph of the cosmic Pentecost. If the parousia is the second coming of Christ in the world, this time in glory, it is also the new revelation of the Holy Spirit, of God’s glory, upon Christ and in the world. It is not a new coming of the Holy Spirit, for having come on Pentecost, the Holy Spirit does not leave the world but is hidden in it for a time, as it were. (p. 400)

“The passage of the world through the Pentecost”—the parousia represents the fulfillment of the prophecy of Joel that the Apostle Peter invoked when he addressed the crowd in Jerusalem (Acts 2:17-21). “The energy of the Holy Spirit destroys the sinful, imperfect old world and creates a new world, with the renewal of all creation. This is the power of the Fire that burns, melts, transmutes, illuminates, and transfigures” (p. 421). The apocalyptic blaze does not utterly consume the world, explains Bulgakov, for Christ is present in the world; “and if Christ is in glory, the world too is in glory” (p. 420).

Thus Christ’s full pneumatic-corporeal reentrance into solidarity with the world is a reentrance through the Spirit, with which His resurrected body is filled. This will be the universal Pentecost with supreme power. Christ’s appearance and the world’s transformation signify that the world is lifted up into a state transfigured by the Spirit who is in Christ, or the Spirit with whom Christ is filled will be completely extended over the world. Then the Spirit will no longer work secretly in the world as in the present time, but He will openly show the effect of His work. The radiance from Tabor will be extended over the whole world. The world will then be the generalized Tabor. The divine life in Christ’s body will fill the whole world. But this will not be the divine essence, but the light and glory that emanate from it as the plenitude of the uncreated energies. Through this the entire creation becomes pneumatic, incorruptible, deified, and transparent. However, in order to become capable of such a renewal, the present form of the world must die, just as the present form of the body must be destroyed so that it may rise up in a form capable of being a complete vessel for the divine Spirit. This will give the world an unimaginable beauty. (The Experience of God, VI:151-152)

I note two possible differences between Bulgakov and Staniloae: (1) whereas Bulgakov associates the divine glory with the person of the Spirit, Staniloae identifies the divine glory with the anhypostatic divine energies; (2) whereas Bulgakov highlights the continuing presence of the Spirit in the world who meets Christ upon his return, Staniloae focuses on the Spirit who indwells the risen and glorified Son. I have not read sufficiently in either theologian to opine whether the disagreement is real or only a matter of emphasis.

The final deification of the world will be simultaneously immanent and transcendent to the world: immanent in that the Holy Spirit already indwells the world in its ontological depths and through the ministry of Holy Church is preparing it for its transformation; transcendent in that God will act upon the world in omnipotent power, bestowing upon it possibilities for life that surpass its original nature. Yet the world will be the same world—not annihilation but transfiguration. “The new, second creation,” explains Bulgakov, “is the completion of the first. The new creation acts inexorably and irreversibly as God’s action in the world, without doing violence to the world” (p. 426).

“Behold, I make all things new.”

(Go to “The Irresistible Truth of Final Judgment”)

18 Responses to Parousia and the Glorification of the Cosmos