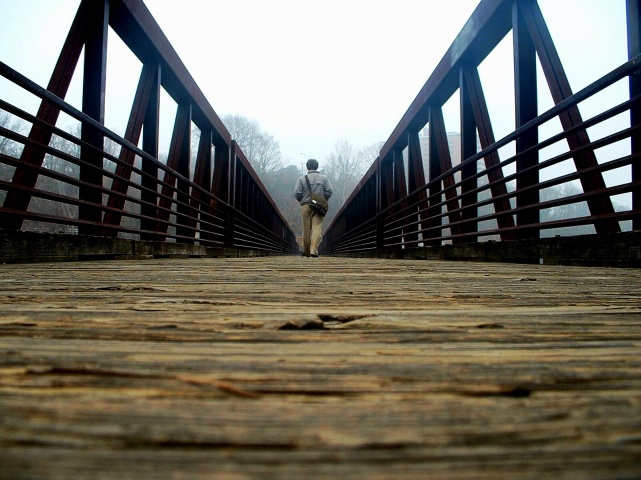 There are three conditions which often look alike / Yet differ completely, flourish in the same hedgerow: / Attachment to self and to things and to persons, detachment / From self and from things and from persons; and, growing between them, indifference / Which resembles the others as death resembles life, / Being between two lives—unflowering, between / The live and the dead nettle. This is the use of memory: / For liberation—not less of love but expanding / Of love beyond desire, and so liberation / From the future as well as the past. Thus, love of a country / Begins as attachment to our own field of action / And comes to find that action of little importance / Though never indifferent. History may be servitude, / History may be freedom. See, now they vanish, / The faces and places, with the self which, as it could, loved them, / To become renewed, transfigured, in another pattern.

In the earlier poems of the Four Quartets, T. S. Eliot affirmed our need to practice ascetical detachment. In “Burnt Norton” he spoke of the descent into “perpetual solitude” and the “destitution of all property.” In “East Coker” of the way of ignorance and dispossession, by which we may arrive at the state in which not knowing is the only thing we know, what we own is what we do not own, where we are is where we are not. Here in “Little Gidding” he now speaks of freedom from “self and from things and from persons.” It sounds all very Buddhist but even more so like St John of the Cross and innumerable Christian ascetical masters: only by detachment and the purification of egoistic desire may the self be “renewed, transfigured in another pattern.” That pattern is love. Recall the words of the Apostle: “I have been crucified with Christ; it is no longer I who live, but Christ who lives in me; and the life I now live in the flesh I live by faith in the Son of God, who loved me and gave himself for me” (Gal 2:20).

There is no escaping the way of detachment—this Orthodoxy has inculcated in me over the past eight years. Decades ago Protestant theologians like Thomas F. Torrance and Karl Barth taught me the eschatological completeness of Christ’s atoning work: in the inhomination, death and resurrection of the divine Son, all of humanity has died and been raised into the life of the kingdom. We cannot add to the cross by our meritorious acts, not even by our faith. In his poem “The Cross,” John Donne asks,

It bore all other sinnes, but is it fit
that it should beare the sinne of scorning it?

“It is indeed,” answers Torrance, “for that is precisely what the Cross was about. There the Lamb of God was bearing and bearing away the sin of the world, including the very sin of scorning it” (The Mediation of Christ, p. 44). We must not think of the Son’s redeeming work as partial or conditional. It occurs in the ontological depths of the human being, recreating human nature and bringing forth a transformed existence. For this reason we must think of Pascha as, in some way, embracing every human being, past, present, and future. The incarnate Word is the eternal Creator in whom all of humanity has been healed and sanctified. No one is untouched by the Incarnation. And yet … and what a disappointing “yet” … Christ’s regenerative work has not been perfectly accomplished in my personal life. Some days it doesn’t even feel partially accomplished. Despite all of my conversions, repentances, and prayers, I remain a disobedient sinner and unfaithful disciple. Lord, have mercy.

Salvation is more than forensic justification. The cancer patient may rejoice that he has been accepted into a special treatment program at John Hopkins Hospital, but that is only the first step. The goal is the cure of his cancer. The justifying word establishes me within the gracious life of the Holy Trinity, but will only become truly convincing, both to myself and to others, when I have been liberated from sin and egoism and begin to live in the Holy Spirit. Hence I appreciate Eliot’s sober summons to the ascetical path. Baptism indeed saves, but it saves by launching us into grace-enabled repentance (1 Peter 3:21). This is hard work that I have spent most of my life avoiding. I need repentance, detachment, and “frigid purgatorial fires” (EC IV). My favorite story from the desert fathers:

When St Sisoës lay upon his deathbed, the disciples surrounding the Elder saw that his face shone like the sun. They asked the dying man what he saw. Abba Sisoës replied that he saw St. Anthony, the Prophets, and the Apostles. His face increased in brightness, and he spoke with someone. The monks asked, “With whom are you speaking, Father?” He said that angels had come for his soul, and he was entreating them to give him a little more time for repentance. The monks said, “You have no need for repentance, Father.” St. Sisoës said with great humility, “I do not think that I have even begun to repent.”

Each morning now I spend approximately an hour in contemplative prayer—at least I hope it counts as contemplative prayer, given the abundance of distracting thoughts (those darn logismoi). Through the Jesus Prayer I seek that “still point of the turning world” which is the eternal dance of the Father and the Son in the Spirit. The anonymous author of The Cloud of Unknowing promises that by contemplative prayer I will “find and experience all virtues in God, in whom everything exists, for he creates all and is in all.” This I desire. My desire grows every day. The author continues:

Contemplatives understand that if they have God, they have everything good and need nothing else, so they desire nothing particularly, only the good God. Be wholly intent on God, and only God, so nothing ever goes through your mind and heart but God alone. (chap. 40)

This is not yet true for me, not even by a long shot. I am not a monk; I live in the world. I desire many things, regret many things. How does one redemptively detach oneself from the persons one loves? Yet I know that my love is itself corrupted by my pathological needs and passions. I thirst—no creaturely drink can quench it. After a lifetime of bondage, I yearn for that liberation of which the poet speaks, “From the future as well as the past.” I pray to become “love beyond desire.” One day it will become true. But today I can only confess, I have not even begun to repent.

(Go to next meditation)