A Journey Through the Night 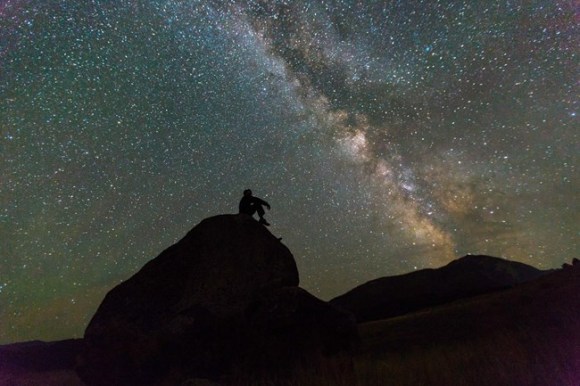 We have at last arrived, dear brethren, by the gates of the Great Lent. Beginning tonight, a period of forty mournful days opens before us, during which we are expected to prepare ourselves, through acts of forgiveness and almsgiving, prayer and fasting, for the celebration of the awesome mysteries of our Lord’s Passion and Resurrection.

At tonight’s vespers, after chanting the Φῶς Ἰλαρόν, the Royal Gates to the holy altar will be closed. They will not be opened again but they will remain closed until we hear that joyous voice at the vigil of Paschal Sunday, inviting us to “Come, receive the light.” Between these two liturgical acts one can find summarized the meaning of the Holy Lent: this is a period of “closed doors,” a period of expulsion, exclusion, exilement—a period of darkness, a sojourn through a long night.

Imagine, my dear brethren, a man who had never experienced darkness of any kind, a man who had never seen a sunset. And now try to imagine, what dread and angst such a man must have felt as, for the first time, the first evening approached. The sun sets—in his eyes a wondrous thing—and for the first time he becomes acquainted with the darkness of the night. This man, tradition tells us, was Adam. Adam who, as long as he was in Paradise, had known of no darkness for he was always in the presence of the true Sun, of the Creator of light. Once, however, the doors of Paradise were closed, and he found himself expelled from that blessedness, exiled in that distant land that was now his curse and his inheritance, a new thing happened to him and, together with the spiritual light, he lost the physical light too, when darkness fell.

What an awful fear, I ask you again, must have the first Man felt in sinking into the abyss of that first Night? Was that to be now how the world would always be? Would that Night be for him a permanent state? Yes and No. Yes: because in one sense humanity has been ever since “walking in darkness”–and our whole human life, as the Midnight prayer says, is nothing but a long night (πᾶσαν τοῦ παρόντος βίου τὴν νύκτα). It is this night, after all, that today’s reading from St Paul’s Letter to the Romans declares as “far spent.” “The night,” St Paul writes, “is far spent, the day is at hand” (Rom 13:12). And No: as far as that night would be succeeded by another day, and that day by yet another night.

A secret tradition preserves for us the story of a second deception of Adam. Not knowing that that first night would indeed be succeeded by a new morning, having, that is, received no promise of a new dawn, Adam thought that the sun would never rise again. Finding him in a state of utter despair, Satan approached him, promising him that he will bring the Daylight back, if Adam and all his decedents were to become his subjects. Adam agreed and thus a contract was drafted, written in parchment or, according to another variant, in a stone, which Adam signed (χειρόγραφον) with his own blood by cutting his palms. As a sign that Adam’s race has become co-signatories of that contract with Satan in perpetuity, every “son” and “daughter” of Adam bears in his or her palms the markings of that signature. That is the contract that our Lord torn into pieces as we hear, for example, in the twenty-second stanza of the Akathist Hymn:

Wishing to bestow His grace, He that forgives the ancient debts of all mankind came of His own will to dwell among those who departed from His favor; and tearing up the writ of indebtedness, He hears from all: Alleluia.

The Christian life remains suspended in such a night, recognizing that the night of this World is transient and passing, that the day of the Lord’s Coming, even if, or especially since, He is coming “as a thief in the night,” demands for us an ever-renewed expectancy for what is to come. As long as the world is identified with the night of which I have been speaking, we Christians can never become comfortable in the world; we can never be “at home” in our exile. We are πάροικοι but not κάτοικοι of the world.

This Christian detachment from the world, and everything that the world stands for, is best exemplified and experienced through keeping the prescribed fasting. A human’s natural desire is of course to eat; when, therefore, we deny ourselves the food that we could otherwise have, we turn ourselves against that desire and against the nature that perpetuates it. We declare that we are not connatural with our fallen nature, that there is more in me than an animal, which desires to be fed and sustained. Everything in our nature is obligatory: we can abstain from food or sleep or anything else that nature dictates, but only for a while. I don’t choose to eat, I have to. Nature expresses herself through such necessities. A human being, however, can and should, if he or she is to remain human, overcome nature’s necessary impulses for the sake of freedom. The man who eats does so because he cannot do otherwise, but the man who fasts chooses to do so out of his own volition. I offer these last remarks on fasting hoping that they help you see that fasting is an act of freedom and not of compulsion. What we lost in Paradise is nothing other than this very freedom—this becomes clear by paying attention to the “curses” that follow-up on our fall: the pains of labor for the woman and the labors of work for man (cf. Gen 3). In other words, what humanity has been condemned to is a life of compulsion. The remedy for our fallen condition will not take place until our common resurrection. It is only under the light of Christ’s resurrection that we see His body freed from such natural compulsions: His is a body that can eat, but doesn’t have to do so. As a foretaste of that eschatological freedom the Church offers us what we could call “exercises in freedom”: the gifts of fasting, of keeping vigils, of celibacy. May Christ our Lord grant to us all that through such gifts we will also be given His kingdom. Amen.

Fr Panteleimon is Associate Professor of Philosophy at the College of the Holy Cross in Worcester, Massachusetts. He is the author of God After Metaphysics, The Ethics of Time, and For the Unity of All. This sermon was first preached on Sunday of Forgiveness (Fourth Sunday of the Triodion) at the Church of the Virgin Mary’s Dormition in Dracut, Massachusetts on  6 March 2011.