The God Who is Person and Love

“In the life of the Church,” writes Christos Yannaras, “God reveals Himself as the hypostasis of being, the personal hypostasis of eternal life” (The Freedom of Morality, p. 16). He rejects any philosophical approach that begins with analysis of the cosmological apprehension of deity, thereby identifying “the truth of being with God as an objective and abstract first cause of existence and truth” (p. 16). Such a starting point must necessarily distort our understanding of the transcendent Creator. “The God of whom the Church has experience is the God who reveals Himself in history as personal existence, as distinctiveness and freedom. God is person and He speaks with man ‘face to face, as a man speaketh unto his friend’ (Ex 33:11)” ( p. 17).

Yannaras thus locates himself within what might be called a revelational personalism. The living God is only known as he freely gives himself to be known. We cannot reason ourselves to God—neither through abstract philosophical analysis (as in Latin scholasticism) nor through the “objective” scholarly study of biblical and theological texts. Only in the sacramental and mystical life of the Church does God present himself to be encountered as personal existence and therefore free from any “predetermination by essence of nature” (p. 17). The living God determines himself; he transcends all natural necessity. “This means,” Yannaras explains, “that the divine essence of nature is not an ontological reality prior to God’s personal existence and determining it: God’s being is not an ontological datum, anterior to the distinctiveness and freedom of the divine person” (p. 17). He approvingly quotes St Gregory Palamas:

And when speaking to Moses, God did not say, “I am essence,” but, “I am He who is”: for He who is, is not from the essence, but the essence is from Him who is. He who is has comprehended within Himself all being. (In Defense of the Holy Hesychasts 3, 2-12; quoted on p. 17)

Yannaras’s elevation of person above nature raises numerous questions. He appears to come close to saying that God wills himself to exist. Thomists will wonder if he is here asserting a voluntarist understanding of Godhead (and if he is, is this a bad thing? why or why not?). Barthians will applaud his rejection of natural theology and his insistence that God is only known in his self-communication, but will no doubt suspect that his understanding of deity still differs significantly from their own (see, e.g., Yannaras’s essay “The Distinction Between Essence and Energies“). Western theologians have not yet given Yannaras the scholarly attention and critique that his work deservedly demands.

The critical difference between Yannaras and both Thomists and Barthians becomes clear in his presentation of the Holy Trinity:

The one God is not one divine nature or essence, but primarily one person: the person of God the Father. The personal existence of God (the Father) constitutes His essence or being, making it into “hypostases”: freely and from love He begets the Son and causes the Holy Spirit to proceed. Consequently, being stems not from the essence, which would make it an ontological necessity, but from the person and the freedom of its love which “hypostasizes” being into a personal and trinitarian communion. God the Father’s mode of being constitutes existence and life as a fact of love and personal communion. (pp. 17-18)

When (Orthodox) Christians speak of God, they are referring to the hypostasis of the Father, who eternally begets the Son and generates the Holy Spirit. In absolute freedom God constitutes himself as a communion of love. The biblical proposition “God is love” (1 Jn 4:16) thus refers not to the divine nature nor to “one among many properties of God’s ‘behaviour,’ but to what God is as the fulness of trinitarian and personal communion” (p. 18). In his immanent self-actualized identity, God simply is love. His divine mode of existence is “nothing other than personal distinctiveness and the freedom of love” (p. 18). 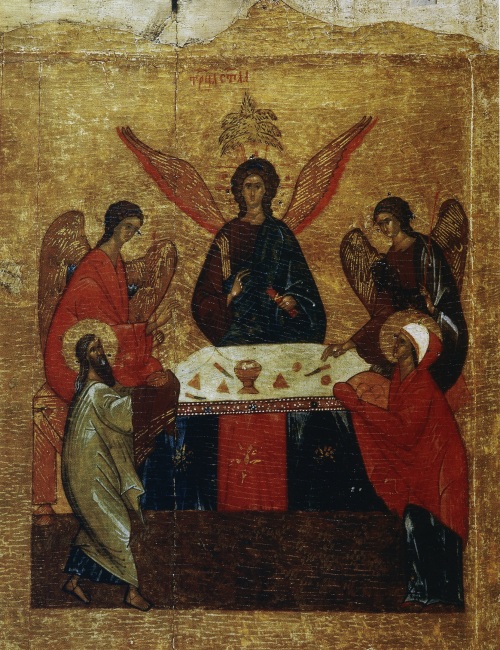 Yannaras elaborates upon his understanding of trinitarian being in his book Elements of Faith:

When Jesus manifests himself as the Son of God, he reveals that “Father” is the name which expresses in the most profound way the hypostasis of God, what God really is: He is one who begets, a life-giving principle, the possibility for a relationship to begin which hypostasizes being (gives being an hypostasis). In the Gospels, Christ reveals that the fatherhood of God has in principle a unique character: it corresponds to the only Son, who is the “beloved” (Mt 3.17), the one in whom the Father “is well pleased” (Lk 3.22), he whom “he loved before the foundation of the world” (Jn 17.24). And love is the assurance par excellence of freedom, the revelation par excellence of personal existence, free from every predetermination of essence or nature.

Here Yannaras comes very close to affirming a “social Trinity.” His theology has been deeply informed by the thought of John Zizioulas, but Zizioulas stops short of speaking of multiple centers of consciousness within the Godhead, recognizing that the Church Fathers attribute the divine will to the divine essence. (Perhaps Yannaras also does, but I’m not sure.) But Yannaras and Zizioulas agree that the Father is the one God who personalizes the divine being as a triadic communion of freedom and love (see “The Importance of the Monarchy of the Father“). Again Yannaras:

Holy Scripture assures us that “God is love” (1 Jn 4.16). It does not tell us that God has love, that love is an attribute, a property of God. It assures us that what God is is love, that God is as love, that the mode by which God is is love. God is a Trinity of Persons and this Trinity is a Monad of life, because the life of the hypostases of God is not a simple survival, a pathetic event of maintaining existence, but a dynamic actualization of love, an unbroken union of love. Each Person exists not for himself, but he exists offering himself in a community of love with the other Persons. The life of the Persons is a “co-inherence” of life, which means: the life of the one becomes the life of the other; their Existence is drawn from the actualization of life as communion, from life which is identified with self-offering love. (p. 36)

We do not comprehend the divine essence, yet we may boldly assert that “love constitutes the being (einai) of Divinity” (p. 28).