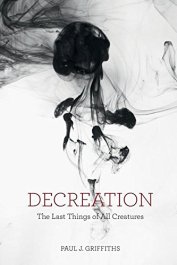 I have begun a slow read of Paul Griffith’s dogmatic reflections on the last things—Decreation. After only a chapter or two I realized that I had before me a book of intellectual depth and speculative power. Griffiths wears his scholarship lightly. For one thing, there are no footnotes. One has the sense that this is a theologian who has been immersed in the topic for many years and is now speaking in his own scholarly authority, under the magisterial authority of the Roman Catholic Church. As my reading proceeds, I will share on Eclectic Orthodoxy specific passages that I think I think the brethren may find interesting. And I fully expect to one or more articles to follow after I have completed this book.

A unique feature of Decreation: instead of the word God, Griffiths uses LORD (all caps). “The LORD: the name of the god of Abraham, Isaac, Jacob, Mary, and Jesus; a triune name that designates Fathers, Son, and Spirit.” Griffiths occasionally uses god “as a category-word for a kind of being, a kind to which the LORD does not belong … If the kind designated by ‘god’ has members, they are all creatures; and while it may be said that the LORD is the god of Abraham, and so on, this is only by courtesy, to indicate that the relationship he has with Abraham, and so on, bears some analogy to the relation the peoples have with their gods (Zeus, Siva, Superman, and so on).”

The LORD is eternal and the LORD is triune. These are axioms of Christian theology; discourse about the LORD that denies or sidesteps either of them is, to exactly the extent that it does those things, not Christian discourse. The LORD’s eternity is constituted by his tri-unity, and his tri-unity by his eternity; to think about the one is therefore to think about the other, and to gloss the one is best done, and in the end only possible, by appeal to the other. Further, the LORD’s eternity is ingredient to, which is to say another way of thinking about, his simplicity: there is no distinction in the LORD between what he is and what he has. Every property or attribute or action spoken of as the LORD’s by us is, in the order of being, what the LORD is. The LORD, as Christian speculative theologians like to put it, is not something other than an addition to his justice, his mercy, his power, his bringing the cosmos into being out of nothing, his election of Abraham, and his taking of flesh as Jesus Christ. All this—the LORD’s properties and his actions—just is the LORD; he is not divided, not composite, not partly here and partly there, partly this and partly that, partly now and partly then. He is eternally (which is neither always nor everlastingly) just what he is. And that is because he is the LORD and not a creature.

All creatures, all realis other than the LORD, exactly are complex (not simple) in these ways. It is definitional of creaturehood to be like that, because to be complex is also to be contingent, to be capable of not being as you are at the moment, and to be capable of not being at all. The butterfly sucking nectar from the buddleia did not always have the wings it has now; was not always where it is now, will soon be elsewhere, and will soon die. Complexity and contingency belong to creatures; neither belongs to the LORD. His mode of being is in this way not even analogically like that of creatures. What analogy there is between creaturely being and the LORD’s being is to be found only in the categories of gift and participation: all creatures are what they are, have the mode of being they have, by gift from the LORD and by way of participation in him. In this way, all creatures are alike; in every other way they differ from one another, both according to their kinds, and in the differences that separate individuals one from another.

This entry was posted in Citations, Theology. Bookmark the permalink.