“For we confess that the faithful receive the very body and blood of Christ, according to the voice of God Himself” 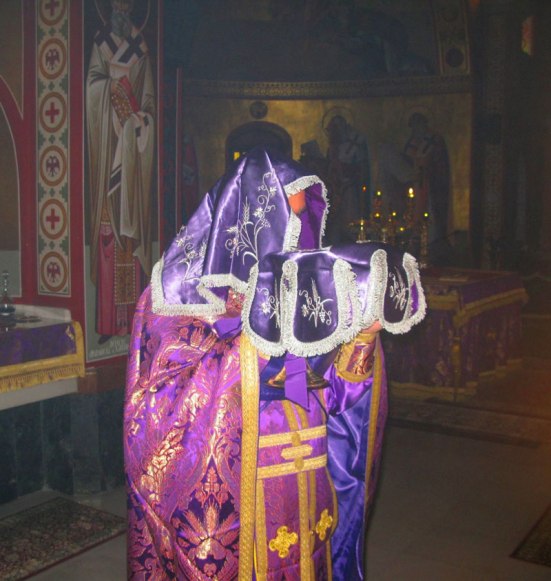 “We grant,” the heretics say, “that Christ may be represented, but only according to the holy words which we have received from God Himself; for He said, ‘Do this in remembrance of me,’ obviously implying that He cannot be represented otherwise than by being remem­bered. Only this image is true and this act of depiction sacred.”

It is sufficient for your refutation that you are clearly contradicting yourself, when you admit that Christ is circumscribed, although previously you denied this. But since it is not right to leave any of your propositions unchallenged, let us proceed to their refutation one by one. What do you say about these very things to which the priest refers in holy words and hymns? Are they an image or the truth? If they are an image, what absurdity! You go from blasphemy to blasphemy, like those who step into some sort of mud, and in trying to get across fall with both feet into something even more slippery. For you have chosen to fall into atheism in order to keep your argument consistent. But if they are the truth—as indeed they really are, for we confess that the faithful receive the very body and blood of Christ, according to the voice of God Himself—why do you talk nonsense as if the sacraments of the truth were mere symbols? “Do this in remembrance of me,” He said, and rightly; for this mystery sums up the whole dispensation, signifying the whole figuratively by its most important part. The fact that He said, “Do this in remembrance of me,” does not mean that this is permitted to everyone, but only to those who hold the priestly office. Neither indeed did He forbid us to celebrate the other mysteries. We make memorials of His Nativity and Theophany. At one time we carry branches to represent His sitting on the foal of an ass, and at another time we kiss one another as a sign of His resurrection. I pass over the ascent to the temple and the tempter’s temptation, in imitation of which we keep the forty days’ abstinence, and other observances which have the same meaning. “Do all these things in remembrance of me,” we must understand that the Word has commanded, including them in silence under the heading of the most prominent mystery.

Or is it not right to understand the same in the case of His corporeal appearance on paper, for example the divinely-written Gospels? He nowhere told anyone to drive down the “concise word,” yet His image was drawn in writing by the apostles and has been preserved up to the present. Whatever is marked there with paper and ink, the same is marked on the icon with varied pigments or some other material medium. For the great Basil, says, “Whatever the words of the narrative offer, the picture silently shows the same by imitation.” For this reason we are taught to draw not only what comes into our perception by touch and sight, but also whatever is comprehended in thought by mental contemplation. Therefore the custom has been handed down from the beginning not only of representing angels, but also of painting the future judgment, with those standing on the right and on the left having more gloomy or more joyous expressions. One thing only is utterly uncircumscribable: the Godhead: which no thought can comprehend, no sound can designate for the hearing, as it is by nature. Likewise its circumscription is impossible. Everything else, since it is defined and comprehended by the mind, can also be circumscribed by either hearing or sight (the two senses being equivalent).

“What, then, is it that is shown?” the heretics ask. “Either the image of Christ or Christ Himself, but not both, for the shadow and the truth are not the same thing. And how could one say that each is in the other, or that either one is in the other? The absurdity is obvious.”

Now one could ever be so insane as to suppose that shadow and truth, nature and art, original and copy, cause and effect are the same in essence; or to say that “each is in the other, or either one is in the other.” That is what one would have to say if he supposed or asserted that Christ and His image are the same in essence. On the contrary, we say that Christ is one thing and his image is another thing by nature, although they have an identity in the use of the same name. Moreover, when one considers the nature of the image, not only would he not say that the thing he sees is Christ, but he would not even say that is the image of Christ. For it is perhaps wood, or paint, or gold, or silver, or some one of the various materials which are mentioned. But when one considers the likeness to the original by means of a representation, it is both Christ and the image of Christ. It is Christ by the identity of name, but the image of Christ by its relationship. For the copy is a copy of its original, just as a name is the name of that which is named.

1 Response to “For we confess that the faithful receive the very body and blood of Christ, according to the voice of God Himself”