Wheels Within Wheels: The First Vision of Ezekiel 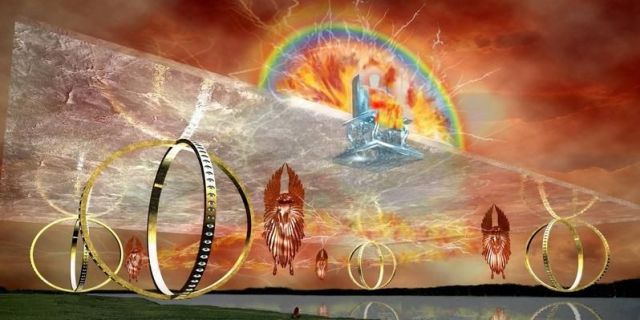 The vision of cherubim and divine throne is fantastic, bizarre, bewildering (Ezek 1:4-28). A theophanic storm draws near. Clearly we are to think back on the divine manifesta­tions to the twelve tribes of Israel, both on Mt Sinai and their journey to the promised land. In the words of the psalmist:

He rode on a cherub, and flew;
he came swiftly upon the wings of the wind.
He made darkness his covering around him,
his canopy thick clouds dark with water.
Out of the brightness before him
there broke through his clouds
hailstones and coals of fire. (18:10-12)

Ezekiel is then given to see four living creatures: each with four wings and four faces (human, lion, ox, eagle), a wheel within a wheel alongside each, the rims filled with eyes. Fire brightly streams forth between the creatures, and they dart to and fro, like flashes of lightning. Above the living creatures is a dome, and above the dome a throne, upon which is seated a “likeness as it were of a human form” (Ezek 1:26). The vision given to the prophet Isaiah immediately comes to mind, as it certainly came to mind to Ezekiel and his hearers:

In the year that King Uzzi′ah died I saw the Lord sitting upon a throne, high and lifted up; and his train filled the temple. Above him stood the seraphim; each had six wings: with two he covered his face, and with two he covered his feet, and with two he flew. And one called to another and said: “Holy, holy, holy is the Lord of hosts; the whole earth is full of his glory.” And the foundations of the thresholds shook at the voice of him who called, and the house was filled with smoke. (Isa 6:1-4)

Whereas we might be tempted to say that Ezekiel is describing the divine throne in light of the Ark of the Covenant, Robert Jenson insists we reverse the relationship:

As literary historians, we might say that the throne of Ezekiel’s vision is modeled on the cherubim throne in the temple and on Isaiah’s vision. But within the intention of our text, we must say that since what Ezekiel sees is the heavenly throne itself, the throne in Jerusalem was modeled on it. The transcendence of the throne that Ezekiel sees over its earthly icon is marked by its hieratic otherness, its sheer difference from any throne conceivable in wood, stone, or metal. Indeed, the throne is alive, as no crafted throne can be; one spirit animates the whole. (Ezekiel, p. 37)

Jenson refrains from speculating on the significance of the specific details, believing their cultic and mythic meanings are now lost to us, nor is he willing to adopt the symbolic interpretations of the Church Fathers (e.g., the identification of the four faces with the four evangelists). His exegesis at this point remains historically rooted. What is important is the revelation of the throne to Israel now suffering exile in Babylon and thus seemingly cut off from the sacred presence of the LORD in Jerusalem. God shows himself as transcending location. His throne can be equally present in Babylon as in the Temple built by King Solomon (still standing at the time of the vision). Hence the import of the wheels: the throne trundles along on Babylonian soil:

That there are wheels is, however, a vital detail indeed. However remarkable their appearance and capabilities, they remain wheels, and Ezekiel insists that they are rolling on earth (1:15). As Ezekiel endures the onset of heaven’s throne, he sees the same Babylonian earth under the throne’s wheels as he feels under his feet, earth that requires that if there are to be traveling thrones, they must have porters and wheels, however preternatural. The division between heaven and earth thus becomes radically problematic: heaven travels on Babylonian earth. The throne has even carried down to earth a piece of the sky, of the dome that in Israel’s theological cosmology separates God’s heaven from our earth (1:22; emphasis mine).

The Greek Fathers tied together the wheels of the vision to Psalm 76:19 (LXX), based on the use of the same Greek term (τροχός): “The voice of your thunder is in the wheel.” St Athanasius, following Eusebius of Caesara, comments:

The voice of your thunder was in the wheel. He uses thunder to speak about the Gospel preaching which resounds throughout the world. For this reason, he dubbed the preacher a son of thunder. He calls the life of human beings a wheel, as taught in Ezekiel. Therefore, it is as if he is saying, “Your Gospel preaching has been spread to every human tribe.” (Expositio in Psalmos 76.19; see Angela Christman, What Did Ezekiel See?, chap. 2)

The prophetic word that will be spoken to Ezekiel in the next chapter will be one of judg­ment, yet even so it is spoken in the context of God’s gracious coming to his people in an alien and idolatrous land. The vision is given to the prophet privately, yet once shared it will become a public word of good news: Israel is not abandoned; the LORD‘s presence is not restricted to a specific locale or building. “The division of God’s place from ours is over­come,” Jenson writes: “the heavenly throne, God’s place, becomes an item within our place” (p. 39).

The glory of the LORD, Israel believed, dwelt in the Temple; but now this glory shines even in Babylon: wherever Israel is, there is her Savior and King. Jenson asks: “Is the Lord merely manifested in the temple, or is he himself there?” (p. 39). The answer must be both. How this is so we will discuss in the next article.

This entry was posted in Bible, Robert Jenson. Bookmark the permalink.

3 Responses to Wheels Within Wheels: The First Vision of Ezekiel