A year after his inaugural vision, the prophet is given a new vision, in three acts:

The abominations center on idolatry and the abandonment of exclusive Yahwistic faith. Israel, the vision reveals, has inclusively combined the worship of YHWH with the worship of the gods of Canaan.

Ezekiel first is taken by the Spirit to the northern entrance of the temple. (The temple is sited on an east/west axis, with the Holy of Holies on the western end.) Before entering (or are we already in the temple courtyard?)  he is told to look north, and he sees an image named “Jealousy” (the meaning is obscure). Robert Jenson comments: “The image itself was probably one of the huge stone statues or lions or mixed animals that guarded the gates of Mesopotamian imperial cities” (Ezekiel, p. 80). Another possibility is a statue of Asherah, as Walther Eichrodt has proposed, perhaps even intimating the conjugal pairing of YHWH with the queen of heaven (Jer 7:18, 44:15-19), as some recent scholars have advanced. Or perhaps it’s some other deity. In any case, we are no doubt intended to think of Ex 34:14: “You shall worship no other god, for the LORD, whose name is Jealous, is a jealous God.”

Instead of entering through the gate or door, the prophet is told to crawl through a hole in the exterior wall of the temple precinct (or are we crawling into a building inside the temple precinct?). Inside he sees elders of Israel offering incense to bas-relief images of “all kinds of creeping things, and loathsome beasts, and all the idols of the house of Israel” (8:10). Why are they worshipping these chthonic deities? Because they have convinced themselves, God tells Exzekiel, that “the LORD does not see us, the LORD has forsaken the land” (8:12). We may conjecture that Judah’s humiliating defeat by Nebuchadnezzar and his ransacking of the temple in 597 BC, followed by the deportation of a large number of people to Babylon (including Ezekiel), had led to a wider embrace of pagan divinities. If the LORD will not protect his people from the heathen and provide for their prosperity, perhaps the gods of the victors will.

The prophet is then shown a group of women, presumably in the courtyard, weeping for Tammuz (Dumuzi), divine consort of the fertility goddess Inanna (Ishtar, Astarte). In the older scholarship, Tammuz was conjectured to be a dying and rising god, along the lines of Adonis in Greek mythology; but archaeological discoveries have called this thesis into question. A more recent proposal: Inanna had been condemned to spend her life in the underworld, but she kills Tammuz, thereby providing an underworld substitute and securing the fecundity of the world. Jenson’s interpretation of this chapter is influenced by the older scholarship, but remains suffi­ciently accurate: “The community participates in and indeed maintains the cosmic cycle of fertility through its ritual cycle, which includes mourning during the time when Tammuz is dead, by the fertile members of humanity” (p. 80).

Finally, Ezekiel is taken into the inner court of the temple, where he sees a group of priests with their back to the temple, prostrating themselves toward the east and worshipping the sun, dispenser of life and health. The worship of the solar deity enjoyed a long history in Israel. Paganism has returned in full force; indeed, it had never left.

The critical theological issue, Jenson states, is the fundamental distinction between Creator and creature:

The pagan gods are not, individually or together, creators of this cosmos; they are powers within it. For Israel’s faith, which knows a Creator, they are therefore creatures, and to worship them is to worship “the creature rather than the Creator” (Rom. 1:25). This is why the animal images to which the elders of Israel offered incense are “idols” without regard to their further character. The Lord of Israel is indeed deeply involved with his creatures, but precisely as their Creator and not as creature—indeed, only because of this absolute difference can he be involved with them at all. (p. 81)

In the absence of this distinction, humanity is always drawn to the worship of the powers and necessities of the world, the foremost being the mystery of fertility. 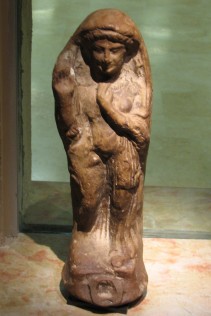 It is a chief philosophical question, implicit from humankind’s beginning, and in sub­stance asked long before modern philosophers formulated it: Why is there anything at all? Why not just nothing? Judaism and Christian­ity answer this: because God is his own reason for being and so can will there to be something other than himself. But absent knowledge of this Creator, another answer regularly imposes itself, for all humanity has one overwhelm­ing experi­ence of something new coming to be: the experience of sexual congress and following new being, with all this event’s correspon­dences in the general phenom­ena of fecundity. To paganism, the cosmos has there­fore appeared as a great cycle of sex and procre­ation; and in one form or another paganism has always worshiped the paired womb-and-breasts goddess and phallic vegetation god. The women at the temple gate have merely joined in with the general religiosity of their world; precisely for that reason, fertility religion was for all the prophets the greatest of abominations. (p. 82)

As for pre-exilic Israel, so for post-Christian secularism. “Late modernity’s world,” Jenson observes, “is again one in which anything at all can be a center of some spirituality, where reality is defined by sexuality, and where priests of the church see no contradiction between panreligiosity and worship of the Lord” (p. 82). It is no easy thing to be faithful to the One God.