Thinking Trinity: So what if Jesus ain’t homoousios with the Father 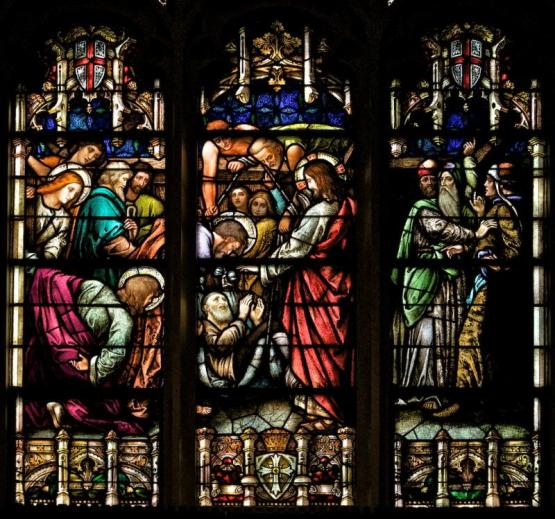 What would happen to the gospel if the Nicene confession of the consubstantiality of the Father and the Son were not true? Would there be a gospel? Consider the story of Jesus and the paralytic:

And when he returned to Caper′na-um after some days, it was reported that he was at home. And many were gathered together, so that there was no longer room for them, not even about the door; and he was preaching the word to them. And they came, bringing to him a paralytic carried by four men. And when they could not get near him because of the crowd, they removed the roof above him; and when they had made an opening, they let down the pallet on which the paralytic lay. And when Jesus saw their faith, he said to the paralytic, “My son, your sins are forgiven.” Now some of the scribes were sitting there, questioning in their hearts, “Why does this man speak thus? It is blasphemy! Who can forgive sins but God alone?” And immediately Jesus, perceiving in his spirit that they thus questioned within themselves, said to them, “Why do you question thus in your hearts? Which is easier, to say to the paralytic, ‘Your sins are forgiven,’ or to say, ‘Rise, take up your pallet and walk’? But that you may know that the Son of man has authority on earth to forgive sins”—he said to the paralytic— “I say to you, rise, take up your pallet and go home.” And he rose, and immediately took up the pallet and went out before them all; so that they were all amazed and glorified God, saying, “We never saw anything like this!” (Mk 2:1-12)

Anyone can say the words “Your sins are forgiven”; but do they actually communicate divine forgiveness? They are only words, human words—empty, impotent sounds. As soon as we speak them, they disappear into the wind. We can no more effect the transformation of sinners than we can raise the dead. But the words of Jesus are different. They accomplish what they announce, effect what they signify. When the Son of Man pardons, he actualizes the pardon of God in human existence: the hearer is changed in his inner being and brought into new relationship with his Creator. As the story makes clear, the absolving word of Christ is more than a declaration of mercy. It is an act of divine grace that reaches, says Thomas F. Torrance, “its full reality in the healing and creative work of God upon the whole man” (Space, Time and Resurrection, p. 62).

Underlying Christ’s performative word of forgiveness is his ontological unity with his Father:

Let us consider the saving acts of Christ as we meet him in the evangelical accounts of his work of healing and forgiveness. Throughout the apostolic tradition, in the Epistles as well as in the Gospels, Jesus is presented to us as acting out of an unbroken oneness between himself and the Father, which is the very ground of his significance. In his miraculous deeds he continues the divine work of creation, and in his forgiveness of sins he exercises a preroga­tive that belongs to God alone. He and the Father are one in their work of healing and forgiving. That is why Jesus’ acts are saving acts, for they are divine acts.

Suppose, then, that there were no such oneness in being and agency between Jesus and God: that would mean that whether in healing someone’s body or in claiming to forgive someone’s sins, Jesus was acting merely on his own as another creaturely being and acting on others only externally like a human physician, without any creative penetration into the inner condition of their need in order to recreate them from within and to undo the sin and guilt lodged in the depth of their existence. Separate Jesus Christ from God like that, and the saving essence goes out of the Christian Gospel. The word of forgiveness becomes merely the word of a man, no more than an evanescent linguistic event with no enduring reality, and is something entirely different from the stupendous divine act of undoing sin and recreating human being. A “forgiveness” of this sort has no divine substance to it, for it is not backed up by the Word and Being of God himself, and lacks any kind of genuine validity, let alone any ultimate validity. Nor does it help matters, as some people thought in the Early Church, to say that Jesus Christ is like God, even similar in being (homoiousios) or in nature to him, for the only kind of similarity that could give saving substance to the words and deeds of Christ would be one in which he was really like God in being and nature, and that would mean being really equal with God and of the same nature as God. That is precisely what homoousios was intended to declare. (“Introduction” to The Incarnation, p. xiv).

I anticipate the kinds of objections that might be raised. Why does it have to be as Torrance describes? Why can’t Jesus simply be a prophet, like Elijah or Jeremiah? If he authorita­tively speaks for God, if he does miracles in the name and power of God, isn’t that enough? Perhaps even the testimony of such an orthodox biblical scholar as N. T. Wright might be invoked: “When Jesus says, ‘Your sins are forgiven,’ he is not claiming straightforwardly to be God, but to give people, out on the street, what they would normally get by going to the Temple.” Yet even so … we may agree with Wright that in this text Jesus is not directly claiming to be God and at the same time affirm Torrance’s critical point. Jesus knows he is not his Father and certainly never claims to be the Father. As he said to one man: “Why do you call me good? No one is good but God alone” (Mk 10:18). Even when the Lord declares his deep unity with God in the Gospel of John, he clearly distinguishes himself from God:

It was the feast of the Dedication at Jerusalem; it was winter, and Jesus was walking in the temple, in the portico of Solomon. So the Jews gathered round him and said to him, “How long will you keep us in suspense? If you are the Christ, tell us plainly.” Jesus answered them, “I told you, and you do not believe. The works that I do in my Father’s name, they bear witness to me; but you do not believe, because you do not belong to my sheep. My sheep hear my voice, and I know them, and they follow me; and I give them eternal life, and they shall never perish, and no one shall snatch them out of my hand. My Father, who has given them to me, is greater than all, and no one is able to snatch them out of the Father’s hand. I and the Father are one.”

The Jews took up stones again to stone him. Jesus answered them, “I have shown you many good works from the Father; for which of these do you stone me?” The Jews answered him, “It is not for a good work that we stone you but for blasphemy; because you, being a man, make yourself God.” Jesus answered them, “Is it not written in your law, ‘I said, you are gods’? If he called them gods to whom the word of God came (and scripture cannot be broken), do you say of him whom the Father consecrated and sent into the world, ‘You are blaspheming,’ because I said, ‘I am the Son of God’? If I am not doing the works of my Father, then do not believe me; but if I do them, even though you do not believe me, believe the works, that you may know and understand that the Father is in me and I am in the Father.” (Jn 10:22-38)

Jesus’ preaching and miraculous works imply an authority, power, and presence that is greater and more profound than that of a prophet. The immediate response of the Pharisees to Christ’s forgiveness of the paralytic and their subsequent accusation of blasphemy confirm this apprehension. Something more is at work here than Jesus speaking as a prophet; more is at work than Jesus doing things reserved for the priests at the Temple. Jesus is not only speaking for God; he is speaking and acting as God. This is why the Pharisees were scandalized, as the passage from John attests. And this is why Jesus’ words and deeds were experienced then—and are experienced today—as saving words and deeds. “But that you may know that the Son of man has authority on earth to forgive sins …” It would take the Church several centuries to work out the appropriate conceptuality by which to express the unique relationship of Jesus to the Lord and God of Israel.

We return to the opening question. If Jesus is not truly one with the Father in being and agency, then his life has no ultimate validity for our lives.

If Jesus ain’t homoousios with the Father, there ain’t no gospel.

4 Responses to Thinking Trinity: So what if Jesus ain’t homoousios with the Father