Tom Talbott Reviews ‘That All Shall Be Saved’ (Part IV)

Christians have traditionally held that, because they are saved by grace, they can take no credit for their own salvation, all of the credit for which goes to God. As Paul himself put it in his letter to the Ephesians, “For by grace you have been saved through faith, and this [the faith] is not your own doing; it is the gift of God—not the result of works, so that no one may boast” (Eph. 2:8-9–NRSV). Indeed, as I interpret him, Paul taught that God’s grace is utterly irresistible in this sense: however free its recipients might be to resist it in certain contexts, or even to resist it for a substantial period of time, they are not free to resist it forever. For the end, at least, is foreordained. In Paul’s own words, “For those God foreknew [that is, loved from the beginning] he also predestined to be conformed to the image of his Son” (Rom. 8:29—NIV). But if some end, such as a person’s eventually being conformed to the image of God’s Son, is predestined or foreordained, then that end cannot be avoided forever.

So how do the infernalists, as David Bentley Hart calls them, interpret this Pauline doctrine of grace and the related doctrine of a foreordained salvation for those whom God has foreknown? Western theology in particular offers two very different (indeed inconsistent) interpretations, both of which in the end undermine the concept of grace entirely. According to the tradition of Augustine, Calvin, and Jonathan Edwards, among others, God restricts his redemptive love to a limited elect even as he foreordains the rest to a fate of eternal torment; and according to various free will theists (Arminians, Wesleyans, Roman Catholics, and the like), predestination itself rests upon God’s foreknowledge of which specific persons will freely choose to accept God’s grace. Both interpretations, Hart argues, illustrate how “the sheer enormity of the idea of a hell of eternal torment forces the mind toward absurdities and atrocities” (That All Shall Be Saved, p. 78). He thus points to Tertullian who spoke of “the saved relishing the delightful spectacle of the destruction of the reprobate,” points to Peter Lombard and Thomas Aquinas who asserted that “the vision of the torments of the damned will increase the beatitude of the redeemed (as any trace of pity would darken the joys of heaven),” and points to Martin Luther who insisted that the saved will rejoice to see their [former] loved ones roasting in hell (p. 78). “Here it suffices to note,” Hart concludes, “that, in the end, the deepest problem with such claims is not so much their logic as their sheer moral hideousness” (p. 79).

For reasons of a kind already mentioned in Part II of this review, any conception of an everlasting hell undermines altogether Paul’s own understanding of God’s all-pervasive grace. In addition to these previously mentioned considerations, the Augustinian interpretation, which restricts God’s redemptive love to a select few, flatly contradicts such explicit scriptural statements as 2 Peter 3:9: “The Lord is not delaying what is promised, . . . intending [instead] for no one to perish, but rather for all to advance to a change of heart” (Hart’s translation), and 1 Timothy 2:4: God “intends all human beings to be saved and to come to a full knowledge of truth” (Hart’s translation). The alternative interpretation, which stresses the power of our free will to overpower God’s intentions concerning our salvation, appeals to God’s foreknowledge of our future free choices. But that interpreta­tion seems clearly to misconstrue Paul’s use of the term “foreknowledge.” For given Paul’s own use of this term, it is persons who are foreknown without regard to any of their future free choices. Elsewhere he thus used the same term when he wrote, “God has not rejected his people [i.e., the people of Israel] whom he foreknew” (Rom 11:2). Here those fore­known are all the people of Israel, including those disobedient ones who had rejected Christ, who had been blinded and hardened (11:7), but who had not stumbled so as to fall (11:11), and whose full inclusion (11:12) would eventually result in the salvation of all Israel (11:26). However disobedient some of them may have been, “as regards election they are beloved, for the sake of their ancestors; for the gifts and the calling of God are irrevocable” (11:28-29—NRSV). The clear implication here is that all of those whom God has fore­known, no matter how rebellious they may have become in the present, will eventually be conformed to the likeness of God’s son.

But if God has foreordained a glorious end for each of us; and if, according to Paul, our ultimate destiny “depends not on human will or exertion, but on God who shows mercy” (Rom. 9:16—NRSV), then a host of confused questions are apt to arise concerning the nature of our independent rationality, the nature of human freedom, and the purpose of an earthly life. Perhaps the most serious of these confusions arises from the false assumption that, unless we freely choose between different ultimate destinies (as if that itself could be a meaningful choice), our free choices have no essential role to play in God’s plan of salvation, no contribution to make to the means of grace available to us, and no relevance at all to the lessons of love we are still required to learn as we travel the road to our ultimate salvation. According to Hart, however, that false assumption ignores the following obvious point: “As an infinite and transcendental end, God’s goodness may [yet] be indeterminate as regards proximate ends, and that very indeterminacy may be what allows for deliberative determi­nations. There may be conflicts and confusions, mistakes and perversities in the great middle distance of life” (p. 186), which could conceivably last for eons. Suppose, then, that we think of these proximate ends, as Hart calls them—the “conflicts and confusions, mistakes and perversities,” as well as the moral virtues acquired in cases of obedience—as the freely embraced means of grace available to us. That begins to look very much like the picture that Paul provided in the eleventh chapter of Romans. For although Paul never even addressed, of course, the philosophical issue of libertarian free will, he nonetheless provided a perfectly clear picture, I believe, of how libertarian freedom, indeterminism, and even sheer chance, if you will, could fit into a predestinarian scheme in which a glorious end is ultimately inescapable. 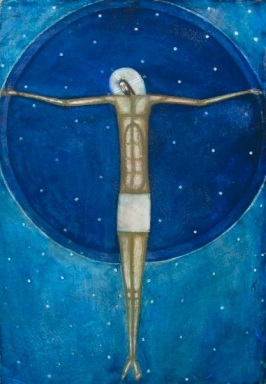 “Note then,” he wrote in 11:22, “the kindness and the severity of God: severity toward those who have fallen, but God’s kindness toward you, provided you continue in his kindness; other­wise, you also will be cut off” (NRSV). As this text illus­trates, Paul held that our own actions, includ­ing any free choices we might make, determine how God will respond to us in the immediate future; they determine, in particular, the form that God’s perfecting love will take. If we continue in disobe­dience, then God will continue to shut us up to our disobedi­ence, thereby forcing us to experience the consequen­ces of our choices and the very life we have chosen to live; in that way, we will experience God’s perfecting love as severity. But if we repent and enter into communion with God, then we will experience his perfecting love as kindness. So given the assumption that we some­times exercise libertarian freedom, our free choices will have very real consequences in our lives and will determine how we encounter God’s grace in the future. But whichever way we choose, God’s perfecting love will meet our true spiritual needs perfectly. For Paul’s whole point in Romans 11 was that God’s severity, no less than his kindness, is a means of his saving grace; and as we saw in Part II of this review, God’s severity towards part of Israel was but one of the means whereby he will save all of Israel in the end. Essential to the whole process, then, is that we exercise our moral freedom—not that we choose rightly rather than wrongly, but that we choose freely one way or the other. We can choose today to live selfishly or unselfishly, faithfully or unfaithfully, obediently or disobediently. But our choices, especially the bad ones, will also have unintended and unforeseen conse­quences in our lives; as the proverb says, “The human mind plans the way, but the Lord directs the steps” (Prov 16:9—NRSV). A man who commits robbery may set off a chain of events that, contrary to his own intention, lands him in jail; and a woman who enters into an adulterous affair may discover that, even though her husband remains oblivious to it, the affair has a host of unforeseen and destruc­tive conse­quences in her life. In fact, our bad choices almost never get us what we really want; that is part of what makes them bad and also one reason why God is able to bring redemptive goods out of them. When we make a mess of our lives and our misery becomes more and more unbearable, the hell we thereby create for ourselves will in the end resolve the very ambigu­ity and shatter the very illusions that made the bad choices possible in the first place. That is how God works with us as created rational agents. He permits us to choose freely in the ambiguous contexts in which we first emerge as self-aware beings, and he then requires us to learn from experience the hard lessons we sometimes need to learn. So in that way, the consequences of our free choices, both the good ones and the bad ones, are a source of revelation; they reveal sooner or later—in the next life, if not in this one—both the horror of separation from God and the bliss of union with him. And that is why the end is foreor­dained: all paths finally lead to the same destination, the end of reconciliation, though some are longer, windier, and a lot more painful than others.

I conclude, therefore, that Paul’s understanding of predestination in no way requires a rigorous theological determinism: the view that God causally determines, either directly or indirectly through secondary causes, every event that occurs. And given Hart’s remarks about “proximate ends” and “the great middle distance of life” on p. 186, neither does Hart’s understanding of universal reconciliation require such determinism. When a grandmaster in chess plays a novice, it is foreordained, so to speak, that the grandmaster will win, not because he or she causally determines the novice’s every move or even predicts each one of them ahead of time; the end is foreordained because the grandmaster is resourceful enough to counter any combination of moves that the novice will in fact freely decide to make. And, similarly, the infinitely wise and resourceful God has no need to exercise direct causal control over our individual choices in order to “checkmate” each of us in the end; he can allow us to choose freely, perhaps even protect us from some ill-advised choices for a while, and still undermine over time every conceivable motive we might have for rejecting his grace. In addition to that, he is the one who has determined the rules of the “game.” So once we learn for ourselves—after many trials and tribulations, in some cases—why separation from God is an objective horror and why union with him is the only thing that can satisfy our own deepest yearnings and desires in the end, all resistance to his grace will melt away like wax before a flame.

(Return to Part I)