Judas Iscariot: Apostle to the Reprobate

In these days he went out to the mountain to pray; and all night he contin­ued in prayer to God. And when it was day, he called his disciples, and chose from them twelve, whom he named apostles; Simon, whom he named Peter, and Andrew his brother, and James and John, and Philip, and Bartholo­mew, and Matthew, and Thomas, and James the son of Alphaeus, and Simon who was called the Zealot, and Judas the son of James, and Judas Iscariot, who became a traitor. (Luke 6:12-16)

Ray Anderson invites us to imagine the scene. Jesus goes up the mountain to pray. It is time to select the men who will serve as the eschatological representatives of the twelve tribes of Israel. Through the night he prays. He has many followers. Perhaps he names each of them before the Father, asking for guidance, illumination, confirmation. In the morning he calls his disciples together and announces his election of the Twelve. Each one is an answer to prayer, including Judas Iscariot!

Perhaps we might have counseled Jesus differently. “Are you sure about Judas,” we ask him. “It would probably be wise to do a background check. A more thorough vetting couldn’t hurt.” But Jesus did not ask us; he asked only his Father:

What is clear and unavoidable in this account of the choosing of the twelve is that Jesus prayed all night and then chose the twelve in full assurance that these twelve had been given by him by the Father in answer to prayer. How­ever difficult and unreliable the twelve might have become, Jesus would always consider them given to him by the Father. Yet they were also chosen, as he often liked to remind them. “You did not choose me, but I chose you and appointed you that you should go and bear fruit and that your fruit should abide” (John 15:16). Jesus later acknowledged in his prayer to the Father that they had been given to him: “I have manifested thy name to the men whom thou gavest me out of the world; thine they were, and thou gavest them to me, and they have kept thy word…. I am praying for them” (John 16: 6, 9).

Judas, the one who became a traitor, was an answer to prayer. This man was given to Jesus by the Father in heaven. (The Gospel According to Judas, p. 46)

Upon his election Judas is irrevocably tied to Jesus in mission to Israel and the world. From that moment on, his life no longer belongs to himself but to the Father and the Son. He is no longer just the son of Simon. He is now an apostle of the Messiah and one of the Twelve.

“But Judas became a traitor!” we retort. “He betrayed the Lord and forfeited his apostolic privileges; his office was filled by Matthias (Acts 2:15-26). What role can he possibly play in God’s plan of salvation, except perhaps as an example of eternal reprobation?” But Anderson proposes an alternative vision for Judas. Do not forget, he reminds us, that Judas—like Peter, James, John, and the others—was an answer to prayer and therefore “had been grasped by an intentional­ity that could not be shaken by his act of betray­al” (p. 49). Divine election precedes and grounds human freedom and destiny. Despite his perfidy, Judas has been assimilated into the mission of Jesus and is everlastingly intended by the divine mercy and providence. God may use evil to redeem evil. We must not think that God has now cast Judas into the garbage heap of Gehenna, as if admitting that he took a gamble on him that just didn’t pay off. “The gifts and the call of God are irrevocable,” the Apostle Paul wrote to the churches in Rome (11:29). Judas did not cease to be the elect of Christ because of his treason; but by the grace of God, suggests Anderson, he is given a different role in the work of salvation:

Judas is not only one representative of the twelve tribes of Israel chosen as the elect of God; Judas is a representative of every one who is the non-elect. Judas stands as the disqualified one, who forfeited his election and squan­dered his inheritance. Judas stands as the apostate Jew and the uncircum­cised Gentile. The placing of Judas within the divine election by which the Son is beloved of the Father and the Father loved by the Son is an answer to prayer for all humanity. (p. 49)

If Judas became enemy and reprobate, he became so for the good of that world that stands under the judgment of the cross. The words of Paul regarding disobedient Israel surely applies to the Jew who betrayed his King:

As regards the gospel they are enemies of God, for your sake; but as regards election they are beloved for the sake of their forefathers. For the gifts and the call of God are irrevocable. Just as you were once disobedient to God but now have received mercy because of their disobedience, so they have now been disobedient in order that by the mercy shown to you they also may receive mercy. For God has consigned all men to disobedience, that he may have mercy upon all. (Rom 11:28-32)

To meditate on the tragic figure of the Iscariot is to enter into the mystery of sin and divine providence. If we use the occasion to retreat into scholastic disputation on the conun­drums of predestination and human freedom, we obscure the terrifying mystery that is Judas. How was it possible for a man chosen by the incarnate Son, a man who had left behind everyone and everything to follow the Lord, who was privy to his Master’s mind and heart, to betray Jesus to his enemies? Surely this is the “impossible possibility” of which Karl Barth wrote in his Church Dogmatics: “sin can only ever be the impossible possibility” (II/1:505). Called and embraced by absolute Love, his feet washed by incarnate Grace, Judas inexplicably, self-destructively gives his God over to crucifixion and death. “What you are going to do, do quickly” (John 13:27). His perfidy cannot be minimized. Judas perverted his apostolic office and executed the violence of Satan upon the Son of God, yet in so doing, he paradox­ically accomplishes the atoning work of God:

We have seen what was involved in the case of Judas. He brought Jesus into the situation where nobody but God could help Him. He seems to have per­ver­ted his apostolic function into its opposite by this act. He seems to have served the devil. And not only seems—for if we look at this act as such, its intention, execution, and consequence in the sphere of the human history of Jesus and his own history, we must undoubtedly say that he actually did this. He revealed and willingly and wittingly executed the final consequen­ces of the fact that the Word of God became flesh, willing to have and actu­ally having a human history, the history of one man among others. By his action he completed the reaction of these other men to the man who was the Son of God. He condemned this very man, and in that way revealed the justice of the condemnation which lies on all other men. He decisively confirmed that the world of men into which God sent His Son is the kingdom of Satan: the kingdom of misused creaturely freedom; the kingdom of enmity to the will and resistance to the work of its Creator….

The act of Judas cannot, therefore, be considered as an unfortunate episode, much less as the manifestation of a dark realm beyond the will and work of God, but in every respect (and at a particularly conspicuous place) as one element of the divine will and work. In what he himself wills and carries out, Judas does what God wills to be done. He and not Pilate is the executor Novi Testamenti. But with his vile betrayal of Jesus to His enemies he is also the executor of the surrender which God has resolved to make and is now making for the benefit of hostile man, and therefore for his benefit…. For this reason, although the earlier saying of Jesus to Judas: “That thou doest, do quickly,” is the bitter judgment upon him, it is also the clear command with which Jesus, as it were, takes from his hand that which he is planning, Himself deciding that what Judas intends to do with Him shall actually be done. It could not remain undone. In one sense Judas is the most important figure in the New Testament apart from Jesus. For he, and he alone of the apostles, was actively at work in this decisive situation, in the accomplish­ment of what was God’s will and what became the content of the Gospel. (Barth, CD, II/2:501-502)

By his free decision and intent, the apostle chosen by Christ to serve the mission of the gospel becomes the chosen reprobate. His halo is black. Yet he remains an answer to the prayer of Jesus. 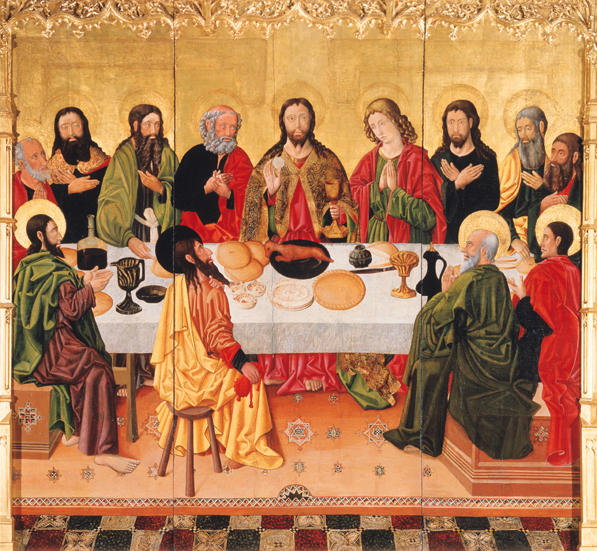 We find it easy to despise and condemn Judas. But was his infidelity really so unusual? “Truly, I say to you, one of you will betray me,” Jesus told the Twelve at the Last Supper. In sorrow and perplexity, they looked at him and asked, “Is it I, Lord?” (Matt 26:20-22). When Jesus chose Judas, he knew that he was a potential traitor and saboteur … but so were the others … so are we all.

9 Responses to Judas Iscariot: Apostle to the Reprobate