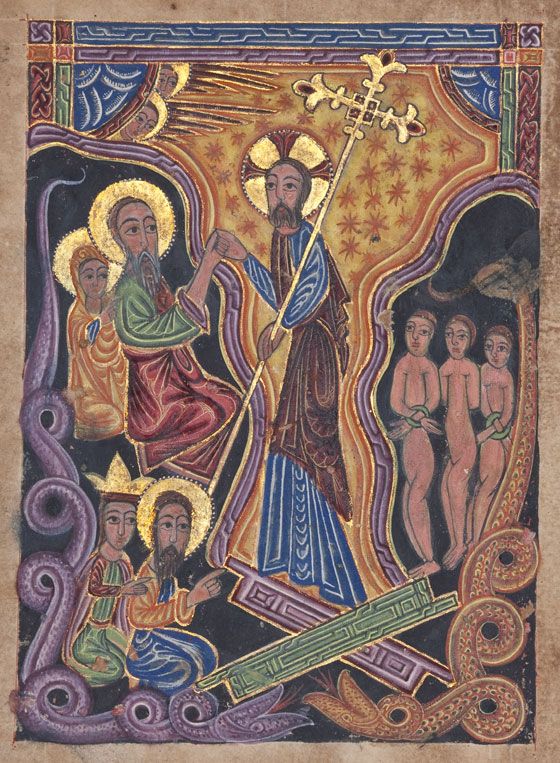 Brothers and fathers, already Pascha, that joyous day, that day of all gladness and delight, the day of Christ’s Resurrection, has arrived in the annual cycle. Rather, it occurs daily and eternally in those who know its mystery, and so has filled our hearts with ineffable joy and exultation. At the same time, it has brought to an end the toil of the all-venerable Fast; or, better to say, it has perfected our souls and consoled them as well. Therefore, as you see, after inviting all the faithful together to rest and to thanksgiving, it has passed.

Let us, then, give thanks to the Lord, who has conveyed us over the ocean of the Fast and led us with joy into the haven of His Resurrection. Let us give thanks to Him, both those who have diligently and zealously completed the course of the Fast with ardent resolve and struggles for virtue, and those of us, as well, who have been weak in this matter through negligence and infirmity of soul. He it is Who with great munificence bestows crowns upon the zealous and due rewards for their deeds, and also in His mercy and love for mankind grants forgiveness to the weaker. For He sees the dispositions and intentions of our souls rather than the toils of our bodies, whereby we exercise ourselves in virtue, whether we intensify our asceticism out of eagerness of soul or practice less than the zealous because of the weakness of our bodies. In accordance with our intentions He measures out the prizes and the charisms of the Spirit to each one, either granting fame and glory to him who is zealous or leaving him still in a lowly state and in need of more strenuous purification.

But, if you will, let us look and carefully examine what is the mystery of that Resurrection of Christ our God that occurs mystically in us at all times, if we are willing, and how Christ is buried in us as in a sepulchre and how He unites Himself to our souls and rises again, raising us with Himself. Such is the aim of our discourse.

Christ our God was suspended on the Cross and, having nailed thereto the sin of the world and having tasted death, He descended into the nethermost depths of Hades. He returned from Hades into His own immaculate body, from which [His Divinity] had in no way been separated as He descended thither, and at once He rose from the dead. Thereafter, He ascended to Heaven with great glory and power. In just the same way, since we have now come out of the world and entered into the tomb of repentance and humiliation by being assimilated to the sufferings of the Lord, He Himself comes down from Heaven and enters into our body as into a grave. He unites Himself to our souls and raises them up, though they were avowedly dead, and then vouchsafes to him who has thus been raised with Christ to behold the glory of His mystical Resurrection.

Christ’s Resurrection is thus our resurrection, the resurrection of us who lie prostrate in sin. He who has never fallen into sin, as it is written, nor suffered any alteration in His own glory, how will He ever be raised up or glorified, since He is always supremely glorified and remains the same, “far above every principality and authority”? As has been said, Christ’s Resurrection and His glory are our glory, which is accomplished in us, disclosed to us, and beheld by us through His Resurrection. Once He has appropriated what is ours, that which He works in us He ascribes to Himself.

The resurrection of the soul is union with life. Just as the body is dead and cannot live or be called alive unless it receives the living soul in itself and is united to it, though without admixture, so also the soul cannot live unless it is ineffably and unconfusedly united to God, Who is truly eternal Life.

Before this union in knowledge, vision, and perception it is dead, even though it is endowed with mind and is by nature immortal. There is no knowledge without vision, nor vision without perception. This is what I am trying to say: there is vision, and in the vision there is knowledge and perception (I say this about spiritual things, for in the corporeal realm there is perception even apart from vision). What do I mean? A blind man who strikes his foot against a stone feels it, but a dead man does not. But in spiritual things, unless the mind arrives at the vision of the things that are above thought, it does not perceive the mystical working of Divine Grace. He therefore who, before he has arrived at Divine vision, claims that he perceives the things that are above mind, word, and thought resembles a blind man who has a sensation of good or bad things that he experiences, but does not know what is in his hands or at his feet, even if they are for him a matter of life or death. Since he is deprived of the faculty of sight and perception, he in no way perceives the bad or the good things that befall him. Hence, he will often lift up his staff to ward off his enemy and sometimes he smites his friend instead, while his enemy stands before his eyes and derides him.

Most men believe in the Resurrection of Christ, but very few are they that have a clear vision thereof. Those who do not behold it cannot even worship Christ Jesus as Holy and Lord. As Scripture says, “No one can say, ‘Jesus is Lord,’ except by the Holy Spirit,” and, elsewhere, “God is spirit, and those who worship Him must worship Him in spirit and in truth.”

For the light-bearing Advent of the Spirit reveals to us, as in early morning, the Master’s Resurrection, or, rather, it grants us to see the Risen Lord Himself. For this reason we say, “God is the Lord and hath revealed Himself unto us,” and we allude to His Second Coming, adding these words, “Blessed is He that cometh in the Name of the Lord.” Those to whom the Risen Christ has revealed Himself, to them has He assuredly become manifest spiritually; He has shown Himself to their spiritual eyes. When this happens to us through the Spirit, He raises us from the dead and gives us life. He grants us to see Him, Who is immortal and indestructible, and not only that, He grants us clearly to know Him who raises and glorifies us with Himself, as all of Divine Scripture attests. These, then, are the Divine mysteries of Christians. This is the hidden power of our Faith, which unbelievers, or those who believe with difficulty, or rather believe in part, do not see and are not able at all to see.

Unbelievers, those who believe with difficulty, or believe in part, are those who do not show their faith through works. For, apart from works the demons also believe and confess Christ to be God and Master. “We know Thee Who Thou art,” they say, “the Son of God”; and elsewhere, “These men are the servants of the Most High God.” Yet such faith will not benefit the demons, nor even men. This faith is of no use, for it is dead, according to the Divine Apostle, who says, “Faith without works is dead,” just like works without faith.

How is it dead? Because it does not have in itself God, Who bestows life. It does not possess in itself Him Who said, “He that loveth Me will keep My commandments, and I and the Father will come and make Our abode with him,” so that by His coming He might raise from the dead and give life to him who has acquired faith, and grant him to behold Him Who has risen in him and Who has resurrected him. For this reason, such faith is dead, or, rather, they are dead who have faith without works. Faith in God is always alive, and since it is living, it gives life to those who come with a good intention and receive it. Even before they have carried out the commandments it has brought many out of death into life and has shown them Christ our God.

Had they persevered in His commandments and kept them until death, they, too, would have been preserved by them—that is, in the state to which faith alone had brought them. But since they “turned aside like a crooked bow” and transfixed themselves on their former actions, they inevitably at once made shipwreck of their faith and wretchedly deprived themselves of the true wealth, which is Christ our God.

So I beseech you, lest we suffer their fate, let us keep God’s commandments with all our might, so that we might enjoy both present and future good things, that is, the very vision of Christ. To this may we all attain by the Grace of our Lord Jesus Christ, unto Whom be glory unto the ages. Amen.