“Let us glorify and thank our Lord and God, who sent into our sinful world the greatest of all, the ascetic and preacher of higher truth, the Forerunner John” 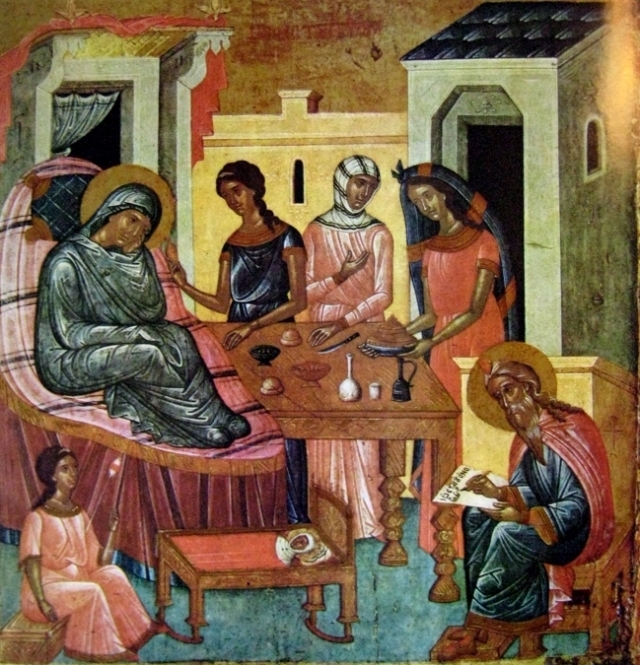 His birth was glorified with the prophetic word of Zechariah, who said: “And you, child, will be called the prophet of the Highest; for you will go before the face of the Lord to prepare His ways, to give knowledge of salvation to His people by the remission of their sins, through the tender mercy of our God, with which the Dayspring from on high has visited us; to give light to those who sit in darkness and the shadow of death, to guide our feet into the way of peace” (Lk. 1:76-79).

The whole life of the Forerunner was a harsh life. Regarding the years of his childhood, we know only that which is told us by the Evangelist Luke, in other words, “he grew and became strong in spirit, and was in the desert until the day of his public ministry towards Israel” (Lk. 1:80). How and when the child was found in the desert we do not know for sure. According to tradition, King Herod, after the slaughter of the children in Bethlehem, wanted to kill John, but he couldn’t find him. This angered him greatly, and because of this he ordered his father Zechariah be killed. His mother, having learned that the soldiers were looking for the child, took him and went with him to a desolate mountain region. There having lived a short time, his mother died and the small John remained by himself in the desert.

We do not know how the Lord God fed him, how he protected him from the wild animals, neither do we know how the young Forerunner learned to eat locusts and wild honey. But we firmly believe that for God all things are possible. See, therefore, that from the beginning, the life of him who would be called greatest of “those born of women” (Matt. 11:11) was an unprecedented and unheard of life. He remained in the desert totally by himself until thirty years of age. What did he do in the desert? What did he occupy himself with? He did not have any handiwork, and didn’t have books, neither did he know letters.

The biographies of the great philosophers, such as Descartes and Kant, relate that these men spent whole days and nights sitting in their armchairs, engrossed in their thoughts. Philosophy is deep, but deeper still is theological contemplation, the greatest form of prayer, which the holy fathers call noetic prayer. The depth of communion in Spirit which the saints have with God is inconceivably great. For 91 years the Venerable Paul of Thebes lived in the desert unknown to the world, having communion only with God. For entire nights until the rising of the sun Arsenios the Great stood with hands lifted up to heaven. For a thousand days and a thousand nights the Venerable Seraphim of Sarov prayed to God on a slanted rock. Likely the same was the work of John the Forerunner during his stay in the desert.

In the ceaseless contemplation of God and of the fortunes of the world, in deep communion of prayer with God, his spirit grew and his understanding of the ways of salvation increased, to which he would teach the people who were being lost in their sins. He would have to change their thoughts and the senses of the people, to make them deeper, to urge them to repent and to change their perverted and evil ways.

This was roughly the purpose which He preordained for His great Forerunner: to prepare the path for our Lord and Savior Jesus Christ. This is precisely why all his life, from a young age until the moment he began preaching on the banks of the Jordan River, was unprecedented and unheard of. This preaching of repentance drew towards him thousands of people submerged in the futility of worldly life.

Let us glorify and thank our Lord and God, who sent into our sinful world the greatest of all, the ascetic and preacher of higher truth, the Forerunner John. And on this blessed day which is full of grace, his day of birth, let us bend our knees and our hearts, praising and glorifying him. Amen.