How Anthropomorphic is your G-O-D?

Confession time: for most of my parochial ministry, I was a theistic personalist, to use the term coined by Brian Davies. 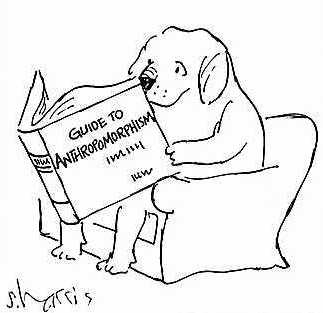 “But what is a theistic personalist?”

“Someone who espouses theistic personalism, of course.”

“And now you are going to tell me what it is, right?”

According to Davies, theistic personalism makes person the decisive philosophical cate­gory for thinking about God (Introduction to the Philosophy of Religion, pp. 9-15). We all know what persons are. For good or ill, we have to live with them every day. So what do we mean by the word? I don’t know what the philosophers would say, but let me throw out this tentative definition—a person is a center of consciousness with whom we can ratio­nally converse. This is probably severely defective (I’m a blogger, dammit, not a philoso­pher!), but at least it will get us started.

Now let’s turn to the Bible and its rendering of deity. Doesn’t YHWH sound and act like a person, not in the sense that we can physically see him, but in all the other important ways that constitute personhood? Consider the definition of God advanced by one of the world’s premier Christian philosophers:

By a theist I understand a man who believes that there is a God. By a “God” he understands something like a “person without a body (i.e. a spirit) who is eternal, free, able to do anything, knows everything, is perfectly good, is the proper object of human worship and obedience, the creator and sus­tainer of the universe.” (Richard Swinburne, The Coherence of Theism, p. 1)

God is that person, Swinburne says, who is “picked out by this description” (The Existence of God, p. 8).

If Swinburne’s exposition represents theistic personalism, then this is pretty much what I preached and taught throughout most of my parochial ministry. I suspect that theistic personalism is the default position of the overwhelming majority of Protestant preachers and probably a fair number of Catholic and Orthodox preachers. It begins where all preachers begin, namely, with the Scriptures. We preach the God of the Bible—the Holy One who spoke to Abraham and commanded him to leave his home and journey to Canaan, who delivered his people from slavery in Egypt, who gave Torah to Moses on Mt Horeb, who spoke to Israel through the prophets, who sent his beloved Son in the fullness of time to die for the sins of humanity and rise into indestructible life. Once God is intro­duced as a character in a narrative, then of course he will and must be portrayed as a being, a divine self, analogous to a human self. How else could a story be told about him? In the pulpit, every preacher is a theistic personalist. This means that if we take the Bible straight, as it were, we will always think of God as person, as a person. All we then need to do is detach God from embodiment and finitude, and … voila! … we have Swinburne’s omnipresent spirit.

Edward Feser has criticized theistic personalism as inescapably anthropomorphic and contrasts it with the classical Christian understanding of divinity:

Theistic personalists, by contrast, tend to begin with the idea that God is “a person” just as we are persons, only without our corporeal and other limitations. Like us, he has attributes like power, knowledge, and moral goodness; unlike us, he has these features to the maximum possible degree. The theistic personalist thus arrives at an essentially anthropomorphic conception of God. To be sure, the anthropomorphism is not the crude sort operative in traditional stories about the gods of the various pagan pantheons. The theistic personalist does not think of God as having a corporeal nature, but instead perhaps along the lines of something like an infinite Cartesian res cogitans. Nor do classical theists deny that God is personal in the sense of having the key personal attributes of intellect and will. However, classical theists would deny that God stands alongside us in the genus “person.” He is not “a person” alongside other persons any more than he is “a being” alongside other beings. He is not an instance of any kind, the way we are instances of a kind. He does not “have” intellect and will, as we do, but rather just is infinite intellect and will. He is not “a person,” not because he is less than a person but because he is more than merely a person. (Also see Feser’s article “Classical theism“)

The emergence of theistic person­alism, unfortunately, has made it possible for theologians and philosophers to begin to significantly redefine the attributes of God. The first to go were immutability and impassibility. After all, don’t the biblical writers speak of God as changing his mind, repenting of his actions, and experiencing grief, anger, and joy? More recently, open theists have begun telling us that the divine omniscience is limited—God does not exhaustively foreknow the future. A significant revision of the traditional under­standing of divinity is now taking place in some Christian quarters. When one reads a philosopher like Swinburne, one hardly notices the shift in emphasis; but the shift becomes marked when one reads those who are more fearless in departing from inherited formulations. Jürgen Moltmann immediately comes to mind.

David Bentley Hart has devoted a few pages of his book The Experience of God criticizing this new, or at least different, model of deity. Hart is blunt. Advocates of theistic person­alism (he prefers the term “monopolytheism”) have broken with the catholic tradition. They are advancing, he writes, “a view of God not conspicuously different from the polytheistic picture of the gods as merely very powerful discrete entities who possess a variety of distinct attributes that lesser entities also possess, if in smaller measure; it differs from polytheism, as far as I can tell, solely in that it posits the existence of only one such being” (p. 127).

There’s a serious theological problem here. I did not begin to recognize it until two decades ago, when I discovered the writings of Robert Sokolowski and Herbert McCabe and began to reassess my theology; but still I minimized it. But then I began worshipping the LORD in the Divine Liturgy of St John Chrysostom. Apophatic theology became not just a way of doing theology but a reality lived and prayed. I find it difficult to articulate in words how this is so; it is the experience of the whole: the chanting and multiple invoca­tions of the Trinity, the icons and metanias, the candles, the incense, the opening and closing of the Royal Doors, the sacred choreography, the anaphora and epiclesis, the communion in the Flesh and Blood of the glorified Christ—together they manifest the subtle interplay of negative and cataphatic theology.

It is proper and right to sing to You, bless You, praise You, thank You and worship You in all places of Your dominion; for You are God ineffable, beyond comprehension, invisible, beyond understanding, existing forever and always the same; You and Your only begotten Son and Your Holy Spirit. You brought us into being out of nothing, and when we fell, You raised us up again. You did not cease doing everything until You led us to heaven and granted us Your kingdom to come. For all these things we thank You and Your only begotten Son and Your Holy Spirit; for all things that we know and do not know, for blessings seen and unseen that have been bestowed upon us. We also thank You for this liturgy which You are pleased to accept from our hands, even though You are surrounded by thousands of Archangels and tens of thousands of Angels, by the Cherubim and Seraphim, six-winged, many-eyed, soaring with their wings.

“We have entered the Eschaton, and we are now standing beyond time and space,” exclaims Alexander Schmemann. In the Divine Liturgy we meet the triadic Divinity beyond being and are lifted into his divine life. Philoso­phy gives way to the Mystery.

16 Responses to How Anthropomorphic is your G-O-D?