A Lion and a Lamb Walk Into a Bar 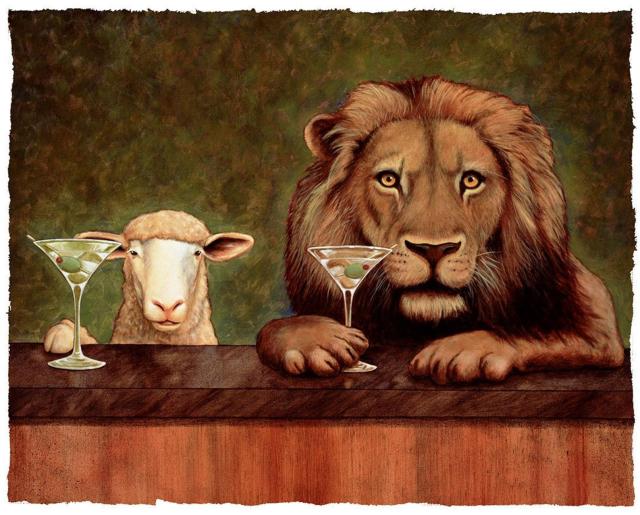 In his article “All Will Be Well,” Denys Turner addresses a topic much discussed in the comboxes of Eclectic Orthodoxy—the problem of evil. Readers will find the first step of his “solution” especially provocative, as he basically removes what many—including our esteemed David Bentley Hart—deem “natural evils” from the equation. These “evils” are inevitable in a universe populated by bodies. And as far as the second step of his argument addressing moral evils … you’ll just have to read the entire article. Read and discuss!

I know that others (including my wife) have different convictions than I do about the matter, but I have personally never had a theological problem with lions eating antelopes, though it is impossible not to feel sorry for the panicking beasts as they flee their predators in such wonderfully graceful leaps and bounds. Of course it is distressing that lions seem as unlikely as ever to get round to lying down with lambs, as Isaiah had hoped they would, but I cannot be troubled about God because they don’t. Lions lying down with lambs would of course be good news for lambs, but it would be terrible news for lions. Eating lambs goes with being a lion; being a lamb-eating machine is more or less what a lion is. And more generally nature seems to require a level of raw indifference in matters of tooth and claw. If there is to be variety and complexity in the natural world we know, including large carnivorous cats, the lambs, alas, are going to have to pay for it with their lives. “Did he who made the lamb make thee?” asks William Blake of the tiger burning bright. The question is rhetorical and the answer is yes: God did make tigers, and consistency would require of those who have a problem of this kind that they consider what alternative world they have in mind that doesn’t replace a problem for lambs being eaten with a problem for carnivores being starved for want of ovine nutrition….

You can guarantee safety for lambs only on the condition of wimpishly vegetarian tigers and lions. You can have an earthquake-free cosmos only on the condition that there are no reliable physical laws to govern it. You can have a world free of physical pain only if it is also a world free of physical pleasure—in short, only if it is a world without nervous systems, which is to say, without bodies. Given the kind of world fit for bodies that we have, these pains are necessary evils where they are not necessary goods. And so it is hard to see why the existence of them is regarded as providing rational evidence against God. Indeed, they seem just as plausibly to be evidence for a providential benevolence within creation.

This entry was posted in Uncategorized. Bookmark the permalink.