“For everywhere He is set forth, by means of shadows and types, both as slain for us, as the Lamb without blame and true; and as sanctifying us by His life-giving blood” 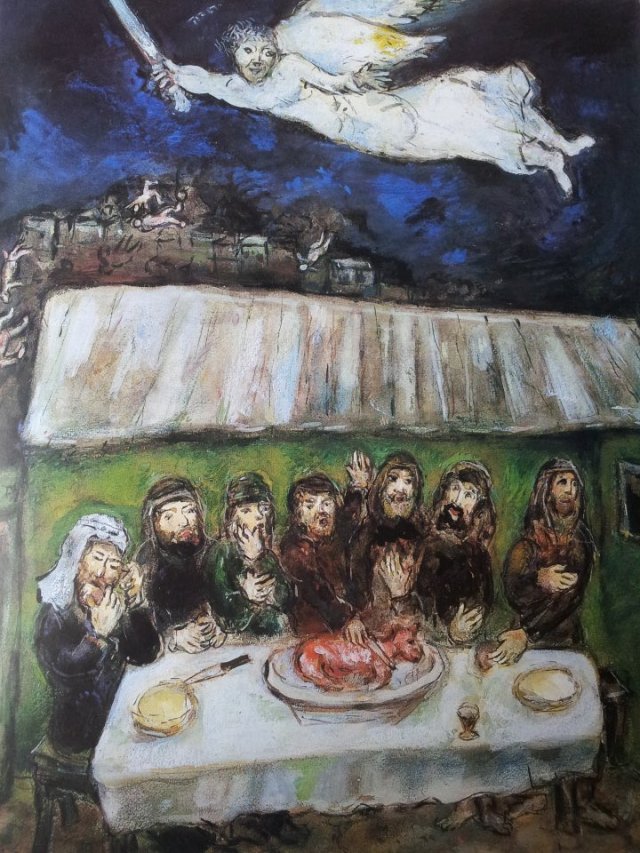 Luke 22:7-16. Then came the day of unleavened bread, on which it was fitting for the passover to be sacrificed. And He sent Peter and John, saying, “Go and prepare for us the passover, that we may eat.” And they said to Him, “Where do You want us to prepare it?” And He said to them, “Behold, when you have entered into the city, there shall meet you a man carrying a pitcher of water: follow him to the house into which he enters. And say to the master of the house, ‘The Teacher says to you, Where is the guest-chamber, where I may eat the passover with My disciples?’ And he will show you a large upper room, provided with couches; there make ready.” And they went, and found as He said to them; and they made ready the passover. And when the time was come, He lay down to eat, and the twelve apostles with Him. And He said to them, “I have longed to eat this passover with you before I suffer, for I say to you, that henceforth I will not eat of it, until it is fulfilled in the kingdom of God.”

The law by its shadows prefigured from of old the mystery of Christ, and of this He is Himself the witness where He said to the Jews, “If you had believed Moses, you would have believed also Me, for he wrote concerning Me.” For everywhere He is set forth, by means of shadows and types, both as slain for us, as the Lamb without blame and true; and as sanctifying us by His life-giving blood. And we further find the words of the holy prophets in complete accordance with those of most wise Moses. But when “the fullness of time was come,” as Paul says, in which the Only-begotten Word of God was about to submit to the emptying of Himself, and to endure the birth in the flesh of a woman, and subjection also to the law, according to the measure that was fitting for human nature, then He was also sacrificed for us, as the lamb without blame and true, on the fourteenth day of the first month. And this feast-time was called Pesach, a word belonging to the Hebrew language, and signifying the passing over: for so they explain it, and say that this is its meaning.

We must explain then what it is from which we pass over, and on our journey to what country, and in what manner we effect it.

As then Israel was delivered from the tyranny of the Egyptians, and having loosed its neck from the yoke of bondage, was now free; and fleeing from the violence of the tyrant passed with dry foot in a manner wonderful and beyond the power of language to describe through the midst of the sea, and journeyed onwards to the promised land: so must we too, who have accepted the salvation that is in Christ, be willing no longer to abide in our former faults, nor continue in our evil ways, but manfully cross over the sea, as it were, of the vain trouble of this world, and the tempest of affairs that is therein. We pass over therefore from the love of the flesh to temperance; from our former ignorance to the true knowledge of God; from wickedness to virtue, and in hope at least from the blame of sin to the glories of righteousness, and from death to incorruption. The name therefore of the feast on which Emmanuel bore for us the saving cross, was the Passover.

But let us behold Him Who is the Truth still honoring the types, and Him Who was represented therein still permitting the shadows to hold good. “For when the day, it says, had come, on which it was fitting for the passover to be sacrificed, He sent to the city two men chosen from the holy apostles, Peter namely and John, saying, that there shall meet you a man carrying a pitcher of water: follow him to the house into which he enters; and say to the master of the house, ‘The Teacher says to you, where is the guest-chamber, where I may eat the passover with My disciples?'” But why, some one perchance may say, did He not plainly mention the man to those whom He sent? For He did not say, ‘Having gone to such and such a person, whoever it might be, there prepare for us at his house the passover,’ but simply gave them a sign,–a man bearing a pitcher of water. To this then what do we reply? That lo! already Judas the traitor had promised the Jews to deliver Him to them, and was continuing in His company watching for an opportunity; and while still making profession of the love that was the duty of a disciple, he had admitted Satan into his heart, and was travailing with the crime of murder against our common Savior Christ. He gives a sign therefore, to prevent him from learning who the man was, and running to tell those who had hired him. “For there shall meet you,” He says, “a man carrying a pitcher of water.”

Or even perchance He so speaks signifying something mystical and necessary thereby. For whither the waters enter, even those of holy baptism, there lodges Christ. How, or in what manner? In that they free us from all impurity, and we are washed by them from the stains of sin, that we may also become a holy temple of God, and partakers of His divine nature, by participation of the Holy Spirit. In order therefore that Christ may rest and lodge in us, let us receive the saving waters, confessing moreover the faith that justifies the wicked, and raises us aloft so as for us to be accounted “an upper room.” For those in whom Christ dwells by faith have a mind raised aloft, unwilling to creep upon the dust, and refusing, so to speak, to be set upon the earth, and everywhere seeking that which is exalted in virtue. For it is written, that “the mighty ones of God are raised high above the earth.” “For here they have no abiding city, but seek that which is to come:” and while walking upon earth, their thoughts are set upon those things which are above, and “their dwelling is in heaven.” We may also notice something true, but wonderful, that happens, so to speak, constantly among us, namely that those who prize their carnal life are often puffed up, and have their heart full of pride accursed and hated of God; but yet perhaps they are brought to humiliation even upon earth, while those who are poor in spirit obtain exaltation by the honor and glory which comes from God. For as the disciple of Christ writes, “Let the humble brother glory in his exaltation, but “the rich in suffering humiliation, because as the flower of the grass he shall pass away.” He therefore would not miss the truth, who should say that the soul of every saint is “an upper room.”

When then the disciples had prepared the passover, Christ ate it with them, being long- suffering towards the traitor, and deigning to admit him to the table from His infinite loving- kindness. For he was already a traitor, because Satan was lodging within him. And what did Christ also say to the holy apostles? “I have longed to eat this passover with you.” Let us examine the deep purpose of this expression, let us search out the meaning concealed therein, and what it is which the Savior intends. As then I have already said that covetous disciple was seeking an opportunity to betray Him, and, that he might not deliver Him to His murderers before the feast of the passover, the Savior did not declare either the house or the person with whom He would celebrate the feast. To explain therefore to them the cause of His unwillingness openly to tell them with whom He would lodge, He says, “I have longed to eat with you this passover,” apparently meaning, I have used all diligence to enable me to escape the wickedness of the traitor, that I might not endure My passion before the time.

“But I will not eat of this passover until it is fulfilled in the kingdom of God.” And in this again Christ utters a profound and mysterious truth, of which He Himself, however, reveals to us the meaning. For it is His custom to give the name of “the kingdom of heaven” to justification by faith, to the cleansing that is by holy baptism and the participation of the Holy Spirit, and to the offering of spiritual service, now rendered possible by the entering in of the gospel laws. But these things are the means of our being made partakers of the promises, and of our reigning together with Christ, and therefore He says, “I will no more draw near to such a passover as this,” one namely that consisted in the typical eating,–for a lamb of the flock was slain to be the type of the true Lamb,–“until it is fulfilled in the kingdom of God,” that is, until the time has appeared in which the kingdom of heaven is preached. For this is fulfilled in us, who honor the worship that is superior to the law, even the true passover; nor is it a lamb of the flock which sanctifies those who are in Christ, but Himself rather, being made a holy sacrifice for us, by the offering of bloodless oblations, and the mystical giving of thanks, in which we are blessed and quickened with life. For He became for us “the living bread that came down from heaven, and gives life to the world,” by Whom and with Whom to God the Father be praise and dominion, with the Holy Spirit, forever and ever. Amen.