So the idea of Christ becoming flesh and of that “becoming” not being subject to temporal limitations, is that related to Maximus and other church fathers like Justin Martyr with the logos spermatikos? So is the idea that the incarnation permeates temporal sequences or time? Is that a corollary to the point you’re making? 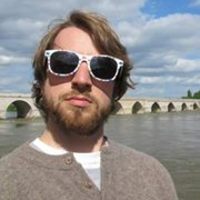 Jordan: Yeah, I guess one way to put it would be, well, we could approach it two ways. Let’s just do it through scripture for a second. I like to start there and hopefully end there. There are statements in scripture like Ephesians 2:10, “You were created in Christ Jesus.” That doesn’t say, “You were created in this principle, that’s the power of God, called the Word that’s just cosmic and only exists, like, way up there somewhere.” It sounds like it’s saying that the human being who is also God, Jesus Christ—that is where and when you were created. Okay. That already sounds a little bizarre. And so I think most of the time we just sort of move on to the next part of the verse and fight about grace and works, which is the rest of that verse.

Or you could go to Colossians one where it’s clearly like this sort of early hymn to Jesus. And it says he is the arche, the “beginning” of all creation. He says the same thing of himself in Revelation, chapter three, verse 14. He refers to himself as “the first of God’s works.” And so what does it mean to say that God’s act of creation (which is an act of creating the conditions of all time—past, present, future) may have occurred in the middle of that time, rather than, as we would naturally assume, at the beginning, like hitting the first domino, you know? There are a few considerations here. One is, it doesn’t seem immediately clear that God’s act—the positive act of creation—must only coincide with the first moment of time, because, of course, the first moment of time is just as distant, as it were, from eternity as this one is right now. So you’re not really getting anything by correlating it automatically with the first moment of time.

But I think the other thing is—and it’s back to “the word became flesh,” that kind of idea—is that God’s act of creation is this act of creating the conditions of time, and so it can’t itself be conditioned by time. That means that it can occur or appear or emerge anywhere in time as the first, as it were, ground zero. And what I suggest is that the New Testament is also suggesting—the Christian faith suggests—that it’s actually the historical incarnation which is the act of God’s creation of the entire world, including all of history.

And that’s not just something I think. Maximus says, for example, in a famous line, he says that in Christ, the hypostatic union, which happens in history—he says in Christ “all ages and all the beings within those ages have received their beginning and end,” not just their end. I think, normally people think: okay, first, creation by God is like the first step, like setting the stage. Then you have to watch the drama unfold, and then this character comes in, and finally it’s maybe, like, the perfection of humanity, but that’s a later act or episode in the story. For Maximas, what he just said was Christ is not just the telos (the end), he says, he’s also the arche (the beginning), and he’s both at once.

(Check out the entire interview)

This entry was posted in Uncategorized. Bookmark the permalink.

4 Responses to An Interview with Dr Jordan Daniel Wood