“God by nature is always one and alone, substantively and absolutely, containing in Himself all-inclusively the totality of substantive being” 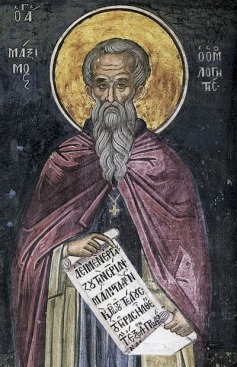 1. God is one, unoriginate, incomprehensible, pos­sessing completely the total potentiality of being, altogether excluding notions of when and how, inaccessible to all, and not to be known through natural image by any creature.

2. So far as we are able to understand, for Himself God does not constitute either an origin, or an inter­me­diary state, or a consummation, or anything else at all which can be seen to qualify naturally things that are sequent to Him. For He is unde­ter­mined, unchanging and infinite, since He is infinitely beyond all being, potentiality and actualization.

5. Origin, the intermediary state and consummation characterize things divided by time, as indeed they characterize things existing in the aeon. For time, by which change is. measured, is defined numerically; while the aeon, whose existence presupposes a ‘when’, possesses dimensionality , since its existence has an origin. And if time and the aeon have an origin, how much more so will those things that exist within them.

9. Created beings can be known rationally by means of the inner principles which are by nature intrinsic to such beings and by which they are naturally defined. But from our apprehension of these principles inherent in created beings we can do no more than believe that God exists. To the devout believer God gives something more sure than any proof: the recognition and the faith that He substantively is. Faith is true knowledge, the principles of which are beyond rational demonstration; for faith makes real for us things beyond intellect and reason (cf. Heb. I I: I ).

10. God is the origin, intermediary state and consummation of all created things, but as acting upon things not as acted upon, which is also the case where everything else we call Him is concerned. He is origin as Creator, intermediary state as provident ruler, and consummation as final end. For, as Scripture says, ‘All things are from Him and through Him, and have Him as their goal’ (Rom. I I: 36).

This entry was posted in Maximus the Confessor. Bookmark the permalink.

8 Responses to “God by nature is always one and alone, substantively and absolutely, containing in Himself all-inclusively the totality of substantive being”