God Creates the World from the Cross

“Since he who saves already existed, it was necessary that he who would be saved should come into existence, that the One who saves should not exist in vain.”1

This quotation from the great second-century bishop and theologian St Irenaeus of Lyons immediately jumped out at me as I was reading the meaty third chapter of Fr John Behr’s The Mystery of Christ. I had to read it multiple times just to make sure I had understood it rightly. Even after checking other translations of the Against Heresies, I’m still not sure if I do. First I turned to the translation of Robert Grant:

Since he who would save pre-existed, what would be saved had to come into existence, so that the saving one would not be in vain.

The punch of the sentence has been muted. “He who saves” (present tense) has become “he who would save” (future tense). Grant’s rendering almost makes Irenaeus sound like a scholastic theologian who has clearly distinguished in his mind the formal distinction between the immanent and economic Trinities—and that can’t be right. Irenaeus is just too early. Then I checked with two patristic scholars. They both preferred Behr’s translation over Grant’s. I found further confirmation in John Saward’s translation:

Since the Savior existed already, the one to be saved had to be brought into existence, so that the Savior should not be in vain.

The old Ante-Nicene Fathers translation renders the verse as follows:

For inasmuch as He had a pre-existence as a saving Being, it was necessary that what might be saved should also be called into existence, in order that the Being who saves should not exist in vain.

For the curious, here’s the Latin text:

As you have already guessed, the punch of the sentence comes in the main clause: “it was necessary that he who would be saved should come into existence, that the One who saves should not exist in vain.” Irenaeus seems to be saying that God created the world in order to save it, as if evil and sin were somehow intrinsic to the world. Needless to say, that would be a contentious thing for any catholic bishop to say. It would contradict two critical orthodox convictions:

My first inclination is to jump in and immediately clarify what Irenaeus surely must have meant. Matthew Steenberg (now Bishop Irenei) offers precisely such a clarification in his book Irenaeus on Creation. Commenting on the sentence in question, he writes:

This is perhaps among the more controversial of Irenaeus’ statements on God’s nature, as it is susceptible to charges of necessitarianism in the divine essence and represents a manifestation of circular logic at which most first-year students of philosophy would balk. Such criticisms ought seriously to be addressed. But Irenaeus’ primary point is not that God was restrained by his nature to create the cosmos and humanity (for he points out elsewhere that God as God can, ultimately, do or not do whatever he likes), but that God’s good nature leads naturally to the creation of a universe in which such goodness can be fully expressed. Irenaeus employs the language of necessity to describe that which he believes is so fundamental to God’s free nature that it could not express itself in any other manner than that described—and, paramountly, that which the nature of the incarnate Christ discloses as the necessary background to his own recapitulative work.2

Sounds right, proper, and orthodox to me; but it does reduce the impact of Irenaeus’ statement, as if the saint were simply guilty of a poor choice of words. “Nothing to see here, move along.” So before retreating into clarification, let’s ask whether something else might be going on here with Irenaeus. Behr thinks there is:

In Adam, the Word sketched out in advance what would be revealed and established in the Son of God, Christ himself. The description of Adam as a ‘type’ implies the prior existence of the one of whom he is a type. As such, the one who was to come exists before Adam; it was by him and for him that Adam came into existence, and, furthermore, as he exists as the Saviour, Adam came into existence to be saved by him. Thus, though only appearing at the end, this one is, nevertheless, the true beginning.

This is a remarkable statement and for our modern theological sensibilities perhaps rather jarring. Yet it is entirely consequential and coherent, and a position held right through to the end of the Byzantine era. It highlights the fact, as we have been emphasizing, that Irenaeus theologizes strictly from within the economy, from what can in fact be known and spoken about, with the right hermeneutic, of God’s activity and revelation in Christ. He resists any attempt to seek a higher perspective to speak about God prior to and independent from creation, a standpoint that would have to be supra-human and, indeed, above God himself; to attempt to speak from such a perspective would, for Irenaeus, be not only presumptuous but also groundless. Yet, since the starting point for Christian theology is the work of God in Christ, understood through the opening of the Scriptures, the Christ who is now known to be the one to whom God said ‘Let us make the human being’ is already known to be the Saviour, to ‘pre-exist’ as Saviour, and so Adam’s relation to his maker is always already that of being saved by the Saviour. We are here far removed from the debate between Thomas Aquinas and Duns Scotus about whether the Word would have become incarnate had Adam not fallen, a debate that has all too frequently set the parameters for interpreting Irenaeus. We are also far removed from any attempt to think of creation and salvation as being respectively, in rather crude terms, ‘Plan A’, followed by the ‘Fall’, which is then rectified by ‘Plan B’. Starting with Christ, Irenaeus would rather see creation and salvation, with carefully defined nuances considered below, as being not two moments within one economy, but rather as coextensive, as the one economy: God’s continuously creative work throughout the economy, resulting in the end in the one who is in the image and likeness of God, is salvation. And, as such, Irenaeus can even say that it was necessary for Adam to come into existence, not implying any lack or need in God himself, but simply as a consequence of the fact that the starting point for all theology is Jesus Christ, the Saviour.3

Irenaeus reflects upon Jesus Christ from within the economia of salvation. He does not come to Scripture as a detached academic but as a believer in Christ who lives within the world of eucharist and gospel. Of course, all orthodox theologians do so, in one way or another; but few have ever concluded that because Jesus died on the cross for the sins of the world, therefore God had to bring humanity into existence; otherwise there would be no need for a Savior. Because Jesus, therefore Adam. Redemption intrinsically belongs to divine creation. The logic turns our heads upside down—but before we dismiss it, let’s recall a couple of verses from Scripture:

And all that dwell upon the earth shall worship him, whose names are not written in the book of life of the Lamb slain from the foundation of the world. (Rev 13:8)

Who hath delivered us from the power of darkness, and hath translated us into the kingdom of his dear Son: In whom we have redemption through his blood, even the forgiveness of sins: Who is the image of the invisible God, the firstborn of every creature: For by him were all things created, that are in heaven, and that are in earth, visible and invisible, whether they be thrones, or dominions, or principalities, or powers: all things were created by him, and for him: And he is before all things, and by him all things consist. (Col 1:13-17) 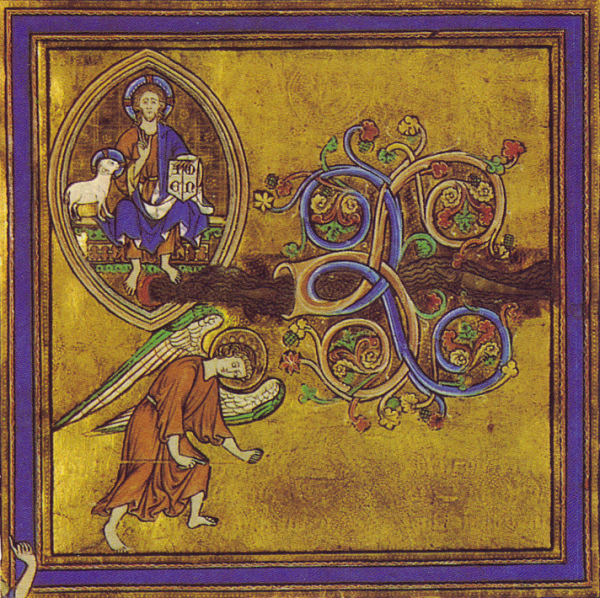 How is the Lamb slain from the foundation of the world when the crucifixion took place in A.D. 33? How can St Paul say that the world is created through and by the man Jesus? What does the Son of God mean when he declares that he existed before his birth, before Abraham . . . before Adam?

“The mystery of the Cross,” writes Fr Georges Florovsky, “begins in eternity, ‘in the sanctuary of the Holy Trinity, unapproachable for creatures.'”

When Irenaeus reads Genesis 2, he sees first not Adam but the Nazarene, in whose image Adam was made. It’s as if time itself begins with the Crucified and flows and backwards and forwards from him. The eternal Father speaks the world into being from the cross. Those who are acquainted with the eschatological theology of Robert W. Jenson will not be shocked. Throughout his distin­guished career, Jenson insisted that the Trinity must be interpreted through the Logos ensarkos: “Our divine savior is not an extra metaphysical entity, whether the unincar­nate Logos of the Antiochenes or ‘the Christ’ of the more feeble sorts of modern theology. He is Mary’s child, the hanged man of Golgotha.”4 Behr would agree and astonishingly suggests that the creation of the universe is properly dated on the day of our Lord’s crucifixion!

We can only speak of creation as having been brought into being by and for its savior Jesus Christ, and its whole history as having been providentially by him, from the moment that he is revealed within its history, as the Passion. Theologically speaking, creation and its history begins with the Passion of Christ and from this “once for all” work looks backwards and forwards to see everything in this light, making everything new. Christian cosmology, elaborated as it must be from the perspective of the Cross, sees the Cross as impregnated in the very structure of creation: stat crux dum volvitur orbis—the Cross stands, while the earth revolves. The power of God revealed in and through the Cross brought creation into being and sustains it in existence . . . Just as the date of the Passion in antiquity was considered to be 25 March (which . . . was the basis for calculating the date of his nativity, nine months later), so also in antiquity 25 March was considered to be the very date of creation, the Creation which revolves around the axis of the eternal, immovable Cross. As paradoxical as it might sound, one can say, theologically, that creation and salvation were effected simultaneously on that day, 25 March, A.D 33, when Christ gave himself for the life of the world.5

“Since he who saves already existed, it was necessary that he who would be saved should come into existence, that the One who saves should not exist in vain”—has any catholic theologian said anything more metaphysically revolutionary than this?

15 Responses to God Creates the World from the Cross