The Meaning of Protestant Theology

When Rodney Clapp, the editor to whom I pitched the idea of my new book, originally suggested the title The Meaning of Protestant Theology, I was a bit nonplussed. I knew the central concept of the book was going to be the sacramental concept of the Gospel that I found in Luther, which comes in at the end of the book’s subtitle: “Luther, Augus­tine, and the Gospel that Gives us Christ.” I love the very concept of the Gospel, as Luther preaches it, and I had a complicated story to tell about what Luther changed in the legacy of Augustine in order to come up with that concept. And of course the changes Luther made had a lot to do with the origin of Protes­tantism. But was I really writing about some­thing as broad and encompassing as the meaning of Protestant theology?

Well, yes, I was. Give credit to a good editor. If you want to know what the book has to offer, you’ll need to hear how Luther’s sacramental concept of the Gospel is essential to the mean­ing of Protestant theology, even for Protestants who don’t think of the Gospel in quite the sacramental way that Luther does. In fact, the problems that result when Protes­tants get too far from ancient, Catholic notions of the sacraments tell us a lot about the anxieties that beset Protestants to this day. That’s why, as Rodney evidently saw, there’s a deep connection between the new book and the rather Lutheran encouragement I was trying to give my Evangelical friends in my earlier book, Good News for Anxious Christians.

This doesn’t mean Catholics have no anxieties of their own. Luther was responding to some of those, after all. But it does mean, I think, that Protestants need something like a Catholic notion of sacrament in order to learn what Luther has to teach them about the saving power of the Gospel. We are justified by faith alone, Luther insists, because the the Gospel of Jesus Christ is an external word that does what a sacrament does: it gives what it signifies to all who properly receive it. And what the Gospel of Jesus Christ signifies is in fact nothing less than Jesus Christ, God in person, together with all the gifts he has to give those who believe him. It is not hard to show (I wasn’t the first to show it) that Luther developed his distinctive notion of the Gospel when he was first writing about the sacra­ments. And it turns out (here I’ll take credit for a little originality) that if you want to understand the characteristic things Luther has to say about the saving power of the Gospel, you have to look to sacraments as the clearest example.

This suggests that the Protestant insistence on justification by faith alone does not come out of the blue, as some radical innovation in the Christian tradition. It’s what has always hap­pened when Christians put their trust in the Gospel of Jesus Christ. Thus what Luther was saying to anxious Catholics (i.e., all of Europe) in the sixteenth century was, in effect: notice what God has already promised you in your baptism and in the Eucharist, and cling to it in faith, rather than turning to your own good works—even the works of love that you are to achieve with the help of faith and grace. If you are anxious about whether you love God enough—whether you are in a state of grace rather than mortal sin—then there is good news for you: all your good works are damnable mortal sins (Luther actually says this), so there’s no point in being anxious about whether they’re good enough. You have no hope of salvation unless you have been baptized into Christ, who shed his blood and gave his body for you, and promised himself to you in your baptism. So unless you call Christ a liar, you have no choice but to believe he is your savior.

I call this a must in service to a may. As one of the baptized, I must believe Christ is mine, which means I may believe Christ is mine–despite all my sins and failures and even the weakness of my faith, which I experience all the time. For in clinging to my baptism by faith alone, I am not putting my trust in my own faith—God forbid!—but in the promise of Christ alone, who both established baptism in Scripture and speaks through the mouth of the minister, saying: “I baptize you in the name of the Father, Son, and Holy Spirit.” When Christ says “you” in this sacramental way, he means me—each one of us to whom this has been said. To believe this is to live in Christ and be united with him as a bride is united with her bridegroom. It is like believing his wedding vow, in which he gives you first himself and then all his goods in a kind of wondrous exchange (Luther calls it) in which you receive his righteousness, holiness, blessedness and salvation, and in exchange your sin, guilt and death become his, to be defeated and destroyed on the cross, in a mighty duel in which his mercy and life triumphs over sin and death.

At the basis of this whole progression from union with Christ to wondrous exchange to mighty duel (and on to further matters like the non-imputation of sins) is the Gospel as external word. The Gospel is external precisely as it is sacramental: spoken at a particular time and place to particular people, so that it can say “you” and mean me (in my baptism) or a whole congregation of the baptized (when Christ says, through the mouth of a minis­ter, “This is my body, given for you“). The truth of this external word is dependent on external circumstances, which determine who is meant by the word “you.” Particular utterances of the word may therefore not be true, as for example when I repeat the baptis­mal formula (“I baptize you in the name of the Father and of the Son and of the Holy Spirit”) as an illustra­tion in a theology lecture or write it down in this article, where I am not in fact baptizing anyone.

Things are different if you forget the sacramental form of Christ’s promise and look for a word that is not so external, whose truth is not dependent on particular circumstances of utterance. Looking at Mark 16:16, for example, you could formulate a universal principle such as “Whoever believes in Christ is saved.” Any Protestant, including Luther, would agree that this principle is true always and everywhere. But it applies to me differently than the sacramental word, because it is conditional, i.e., logically equivalent to the condi­tional statement “If you believe in Christ, you are saved.” The principle applies to me not by saying “you” and meaning me, as a sacrament does, but by requiring me to meet the condition stated in the “if” clause. So if I take this kind of principle as Gospel, then in order to trust that Christ is my savior, I must believe in more than just the word alone; I must also be able to say, with confidence and sincerity, that I believe in Christ. I must, to that extent, believe in my own belief.

The anxieties of a non-sacramental Protestantism are the anxieties that stem from such a reflective faith, with its requirement of believing that I believe, in contrast to Luther’s requirement, which is that I believe in nothing other than the truth of God’s word. The result is a subtle but deep difference in pastoral care, as many later Protestants try to find assur­ance that they have true saving faith—for example by trusting that they have made a decision for Christ, as if this is something that could save them—whereas Luther expects all Chris­tians to confess their unbelief on a regular basis. Thus, whereas in most forms of Protes­tantism, saying I am an unbeliever would mean I can’t believe I’m saved, for Luther saying I’m an unbeliever is a way of strengthening my faith, because it is a confession that leads me to put renewed faith in the truth of God’s alone. I believe I am saved because I believe the promise of God given to me in baptism, not because I believe in my own belief. 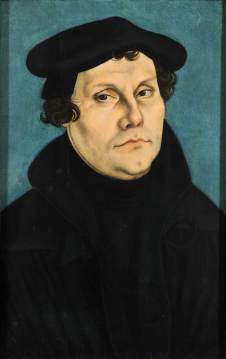 Luther has his own anxieties, of course, which are summed up in the famous word Anfechtung, meaning the assault of the devil who tries to get us to doubt that God is true to his word. But even the nature of the doubt here is less reflective than in later Protestant­ism: what we must believe (and therefore the doubt we struggle with) is that God is true to his word, as opposed to the later Protestant doubt about whether I truly believe. What Luther’s unreflective faith cannot do, on the other hand, is assure you of eternal salva­tion, for that would require having assurance in advance that you will perse­vere in faith to the end. The only way you could know that is if you knew you were one of the elect, predes­tined for salvation. The radical innovation of John Calvin is that he thinks it is possi­ble to know this—precisely by virtue of reflective faith: i.e., by knowing, through the experience of the inner call of the Holy Spirit, that you have been given the gift of true saving faith, which is sure to persevere to the end.

A lot depends, pastorally, on which anxieties people are willing to live with. I think this explains why so many Protestants, when they rediscover the Great Tradition and especially its sacramental liturgies, end up joining some high-church tradition: Roman Catholic, Eastern Orthodox, Anglican or Lutheran. Protestants want to hear precisely the kind of word that Luther calls the Gospel, which has always been the means by which God gives himself to his people. In contrast to the law of God, which tells us what to do, including how to get saved, the Gospel tells us what God has done, including how he has given his own Son to save us. Thus the preaching of the Gospel, which happens throughout the ancient liturgies far more reliably than in most modern preaching, builds up our faith not by telling us we must believe but by giving us a kind and gracious word to believe in. For once you begin to think of the Gospel as a sacramental word that gives you Christ, as Luther discovered, the whole Biblical narrative starts looking like God’s way of giving you nothing less than himself, and sacramental worship is so full of this good news that it’s enough to make you weep for joy.

Dr Phillip Cary is Professor of Philosophy at Eastern University. He is the author of several books, including Augustine’s Invention of the Inner Self, Inner Grace, Outward Signs, Good News for Anxious Christians, and the Brazos commentary on Jonah.

6 Responses to The Meaning of Protestant Theology