“The theophany of the parousia,” Sergius Bulgakov declares, “has all-conquering power and irresistible force” (The Bride of the Lamb, p. 492). As we saw in the previous article, he believes the persuasive power of the parousial manifestation of the glorified Christ flows from his identity as Primal Image and Prototype of humanity. The New Adam is not alien to human nature, for we have been created in his image. This image has not been destroyed, and cannot be destroyed, by our sin and wickedness. We enjoy, in other words, a natural affinity for Jesus. He is inscribed upon our being. Hence to see him in his glory is to see the One who is the fulfillment of our questing for meaning and self-knowledge.

Following many of the Eastern Fathers, Bulgakov distinguishes between “image” and “likeness” (Gen 1:16): “The image is the given implanted by God, the sophianic image of man, whereas the likeness is the task proposed for man, his proper work, by which he is to realize his proper image in creative freedom, in the sophianization of himself and of all creation. The image of God is the inalienable ontological foundation; it is the initial power that is implanted in man for his life and creative activity” (The Lamb of God, p. 147). This power can increase or decrease, as man exercises his freedom to fulfill, or not fulfill, his theanthropic vocation; but it can never be completely lost. Eastern theology specifically insisted upon this point in the 16th and 17th centuries against the Churches of the Reformation. The human being can never eradicate the law of his being given to him in creation.

That man bears the image of the God-man grounds Bulgakov’s confidence that every human being will find the glorified Jesus Christ utterly persuasive and irresistibly compelling. In the parousial revelation of the Image, “God definitively defeats man here by persuading him of his truth and power. Job’s dispute, as Israel’s opposition to God, exhausts itself here. God is so irresistibly persuasive for man because man receives God into himself, in his sophianic proto-image. In this image, man perceives the Divine Sophia, attains a self-knowledge so lofty and clear that it frees him from creaturely freedom as the faculty of choice between different and contradictory possibilities. Man transcends this freedom by a free necessity. Therefore, a new falling away from God is now and forever impossible for man, just as it is for the holy angels. The dispute between the Creator and creation inevitably ends for creation when it recognizes that it is defeated” (Bride, p. 492).

Orthodox theologian Paul Gavrilyuk criticizes Bulgakov precisely at this point. Unlike the hopeful universalism of Hans Urs von Balthasar and Karl Rahner (and Kallistos Ware), Bulbakov’s universalism is characterized, he asserts, by an “ontological necessity” (“Universal Salvation in the Eschatology of Sergius Bulgakov,” p. 128). In Gavrilyuk’s opinion human freedom becomes imaginary if we do not leave open the “possibility for permanent and decisive creaturely rejection of God” (p. 129). Yet why must this be so? Gavrilyuk does not tell us. He simply claims that such is the nature of freedom. Yet it is by no means self-evident that human liberty requires the possibility of eternal self-exclusion from the Holy Trinity. This contention needs to be philosophically argued and established; it cannot simply be assumed (see, e.g., my articles “Universal Salvation” and “Rational Freedom“). It is most certainly not the case that the Orthodox Church has dogmatically defined a particular understanding of human freedom in relationship to the salvific activity of God.

Some of my readers may now be thinking to themselves, “Bulgakov’s construal of the compelling persuasiveness of Christ’s parousial self-revelation sure sounds like St Augustine’s notion of irresistible grace.” And they would be right! Yet Bulgakov himself would disagree. He devotes an entire chapter of The Bride of the Lamb comparing his Orthodox understanding of synergism with the Augustinian formulation of predestination. He rejects the Augustinian view, continued in the theologies of St Thomas Aquinas and John Calvin, because of its “causal monism.” Augustine, he says, reduces the relationship of the universe to the Creator to a mechanistic-deterministic system. Authentic freedom is eliminated.  Calvin simply took Augustine’s position to its logical conclusion when he asserted double predestination to glory and reprobation, “thereby making the Gospel approach the Koran” (p. 217). Bulgakov would therefore strenuously object to Gavrilyuk’s characterization of his apokatastasism as a form of determinism. A crucial difference exists between forcing a person to repent and persuading them to do so. Grace convinces “‘not by might, nor by power; but by my spirit’ (Zech. 4:6), in the end by divine love” (p. 226). 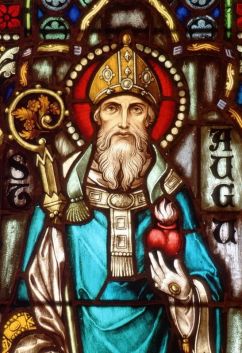 And St Augustine of Hippo would agree! Aidan Nichols suggests that “Bulgakov does not really understand St Augustine, and after him St Thomas, on freedom” (Wisdom from Above, p. 74). I think Nichols is probably right. But Bulgakov is not alone in his misreading of the North African bishop. The same can probably be said of most Eastern Orthodox theologians.

Phillip Cary surveys the development of Augustine’s understanding of divine grace and human freedom in his instructive book Inner Grace: Augustine in the Traditions of Plato and Paul. For Augustine, the human being is made for God and is restless until it rests in him. God is our supreme Good. We can but delight in him when we finally see and know him as he is:

Whereas for the Stoics all human motivation stems from the mind’s assent, for Augustine it is all the outcome of a faculty of will whose every act is to love. And Platonist love, while deeply allied to reason, does not work like rational assent or judgment. We do not fall in love by judging it would be best, as if that were a decision within our power to make. Yet once we are in love, we freely assent to what love desires, because our loving has become the center of our will. Falling in love determines rather than is determined by our free choice, and every happy lover welcomes this and finds it to be an enhancement rather than an impairment of human freedom. Thus Augustine’s Platonist eroticism allows him to interpret Paul’s doctrine of grace in ways that have often been thought to threaten free will, but that Augustine thinks reinforces what free will is for. “The choice of the will is not taken away by being helped,” as he puts it. Or as he also says, echoing Paul, “Do we by grace make free will void? Not at all! Rather, by grace we establish free will.”

The experience of grace for Augustine is very much like falling in love. It means being overtaken by a kind of delight that is not in our power to choose but that, once it overtakes us, causes us to choose its object gladly and wholeheartedly. It is a choice we never regret, because unlike earthly loves it leads to a happiness we cannot lose. The delight in Truth given by the inward teaching of grace leads us to enjoyment of what every soul necessarily seeks: for the one thing that is necessary about free will is that it is a will for happiness, and the only thing that can make us truly happy is that which makes us eternally happy (so that a truly happy life is necessarily, as the Bible puts it, an eternal life). So the inward teaching that gives us enjoyment of eternal truth fulfills out deepest desire, leading our restless heart to the only thing that will give it eternal rest. When delight in God overcomes us, we have found our one true love. That is why we always welcome the love for God when it is “poured out in our hearts by the Holy Spirit,” a key formulation of the effect of grace that Augustine develops from a startling phrase in Paul. We cannot regret what makes us eternally happy, and we cannot ultimately resist it. This does not mean grace compels us to do anything against our will, but rather that it changes our will, making us willing where before we were unwilling—so that we find it delightful to do what before was burdensome. God makes this inward change in us not by the external force of coercion, but by the inner power of his own beauty. If even earthly beauty sometimes overwhelms us with delight, how can we resist the Divine Beauty that is the very substance of unending Happiness? So the gift of grace, poured out deep within our hearts by the Spirit of God himself, does precisely what coercion cannot: it moves the will rather than the body. For free will is indeed freedom from coercion but not freedom from true Beauty. The latter would make no more sense to a Platonist than an eye being free from the light. (Inner Grace, pp. 15-16).

Does the lover complain that his freedom has been compromised or violated by the delightful and compelling beauty of his beloved? Of course not. Only lovers are truly free.

1 Response to Irresistible Grace: Is Sergius Bulgakov an Augustinian?